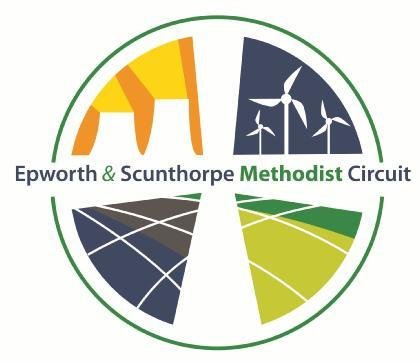 Chair of the Lincolnshire Methodist District

17 After Jesus had spoken these words, he looked up to heaven and said, “Father, the hour has come; glorify your Son so that the Son may glorify you, 2since you have given him authority over all people, to give eternal life to all whom you have given him. 3And this is eternal life, that they may know you, the only true God, and Jesus Christ whom you have sent. 4I glorified you on earth by finishing the work that you gave me to do. 5So now, Father, glorify me in your own presence with the glory that I had in your presence before the world existed.

6”I have made your name known to those whom you gave me from the world. They were yours, and you gave them to me, and they have kept your word. 7Now they know that everything you have given me is from you; 8for the words that you gave to me I have given to them, and they have received them and know in truth that I came from you; and they have believed that you sent me. 9I am asking on their behalf; I am not asking on behalf of the world, but on behalf of those whom you gave me, because they are yours. 10All mine are yours, and yours are mine; and I have been glorified in them.

11And now I am no longer in the world, but they are in the world, and I am coming to you. Holy Father, protect them in your name that you have given me, so that they may be one, as we are one. NRSV

Those who organised the lectionary readings have provided us with a fascinated passage to consider on this the Sunday after the Ascension.

Today also happens to be Wesley Day, the day Methodists celebrate the experience of John Wesley at a religious gathering in a Moravian house on Aldersgate Street, London that changed his ministry for ever.

I am going to look at each in turn: the prayer of Jesus in the Garden and then Wesley’s new-found insight. There is a theme linking the two and that is Letting Go.

Firstly, the Jesus who lets go.

The writer of John’s account of the Gospel is keen to ensure that the new community of believers should have something to wrestle with. Biographical details are insufficient for him. He prefers to present theological understanding rather than just incidents in the life of Jesus. It is not enough to have Jesus praying alone and disciples falling asleep. John has to expand on the situation, telling us what Jesus would have been praying. Few preachers ask how John would have known what Jesus was saying, after all there were no witnesses to this prayer, no-one eavesdropping, they were all asleep. The response has always been that John’s community believed that the Holy Spirit, the continuing presence in the community of the risen and ascended Jesus, led them to know what Jesus was praying; just as the community were able to record the very lengthy discourses between Jesus and the disciples or between Jesus and others.  The compiler of John’s account has no problem, therefore of putting down in writing what was believed to have been the very words of Jesus decades, maybe seven or eight decades, before.

But what we have here is the community recognising that Jesus reached a point where he was able to acknowledge that his earthly ministry was reaching its climax. Just a few hours before the crucifixion, the community has Jesus looking up to heaven and calling on his Father, accepting that the job is all but done. The community believe that Jesus goes on to is commend the disciples to the Father. He has brought them together, walked with them, ministered alongside them, debated with them, now they are ready to take over the reins.  This is the approval the community of believers need. What they say and teach has, after all, been authorised by Jesus, even if it was so long ago, two generations of believers before even. The present community, for whom John writes, believes itself to be the recipient of divine sanction. So Jesus is letting go. His time on earth is coming close to an end.

This is a fitting passage for the Sunday after Ascension I believe because I can’t help but feel that the Ascension was all about the disciples also letting go. They had indeed been brought together by Jesus, they had walked with him, been with him as he ministered to the towns and villages, and they had indeed debated with him. Now much was to be expected of them as Jesus is taken from them. The story of the Ascension is, then, about the disciples recognising that the responsibility for the Gospel had been passed on to them.

There comes a moment in the bereavement process when the grieving soul recognises that the loved one they mourn is not going to be there at the meal table, or out in the garden, or beside them when they struggle to fill in a form. They must eat, work and get on with life without them. It is a painful moment after the initial shock and denial. It is in itself a letting go. It is also the embracing of the struggle ahead.

This is so, not just in bereavement, of course, but also, when our ambitions are thwarted and we realise that we need to try a different course. It took me a little while to realise that I would not become a professional footballer and score a winning goal at Wembley. I still have dreams in my sleeping hours of putting on the boots again and stepping onto a freshly mown pitch. So I guess the loss remains. But in my waking hours, and at the age of 60, I can now laugh about it.

The process of letting go is the beginning of something new. This is to neither deny what has taken place nor is it to treat the loss as nothing, but it is to open up to the possibilities God may call us to seize upon and turn into reality. This is what redemption is all about: God transforms the loss into gain; God reveals a different path ahead; God brings into being a sense of wholeness, of completion and an unfathomable fulfilment.

So, secondly, what of John Wesley’s experience about a quarter before nine on the evening of 24th May 1738?

This too was, for Wesley, a form of letting go. Up till now the young Anglican priest, though fervent in prayer, study and peaching, had been heavily reliant on his own efforts. Like many before him and since, there came a point in his life when it dawned upon him that he could not continue in his own strength. Wesley was carrying all sorts of baggage and he was burdened by much. It was on hearing of God’s grace, of God’s unconditional and unlimited love, that Wesley felt his heart strangely warmed and the interminable weight gone from his shoulders.

Becky Bland was the widow of the Revd Arthur Bland. In her eighties she was about to take her first flight in a plane. I wondered if she was nervous. ‘Why should I be?’ She asked in her soft Merseyside accent. ‘Nothing matters at my age; once it gets airborne it will either land at the other end or it won’t.’

As a minister I have been amazed, and deeply humbled, at the openness of many who are of mature years. They have become less concerned about what the minister might say when they share something of themselves than perhaps they would have been decades before. I don’t think this has been due to a changing culture or relationship between member and minister because I have known it throughout my ministry.

I sometimes consider whether it would be possible for us all to be less conscious of how we appear to others well before reaching such an age.

Letting go of the pretence, letting go of the image we have constructed for ourselves can be amongst the most liberating of experiences, even if that image has been a form of self-defence.

If we can reach a point where we don’t give a monkeys about what others think so long as we are faithful and true to ourselves, our neighbours and above all else God, then we are mature Christians indeed, whatever our age in years.

We now that much of what Jesus accomplished in his miracles was to set people free from that which held them back: blindness, paralysis, shame, any apparent or imagined deficiency. Anything that could be construed as being incomplete in the eyes of the sufferer or observer was not exempt from the liberating acceptance of Jesus and the wholeness that followed. All this could be said to be a form of letting go, letting go of that which had been holding the captive back. As a consequence, there came into being a new-found freedom of unbounded fulfilment.

In an age of acquisition, it is more challenging to let go of stuff. The material wealth with which we surround ourselves is an extension of our inability to let go of self. Only with the confidence of a mature faith are we able to fully rest in what the future may bring, knowing that we remain safe in God’s hands.

Many years ago I came across one of those cards you sometimes find in cathedral bookshops, or more likely in tis instant some new age shop in Glastonbury. I couldn’t find it when I looked for it the other day, I’ve probably let it go! But it went something like this:

If I were to have the chance to live my life again I would do things differently.

I wouldn’t worry about what others might think of me.

I would dance more freely, without a care in the world.

I would play without a safety net.

I would go to more places, travel further, and even go without a parachute.

Our world has now reached a point when actually we don’t have to wait until we are of a certain age to not be so concerned as to what others think.

Our world is very different to the one we knew just a few months ago.

Our world is now experiencing a collective reawakening on the precious time we have here.

So: live, love and be free in the grace of Jesus Christ, for this is the day of salvation.