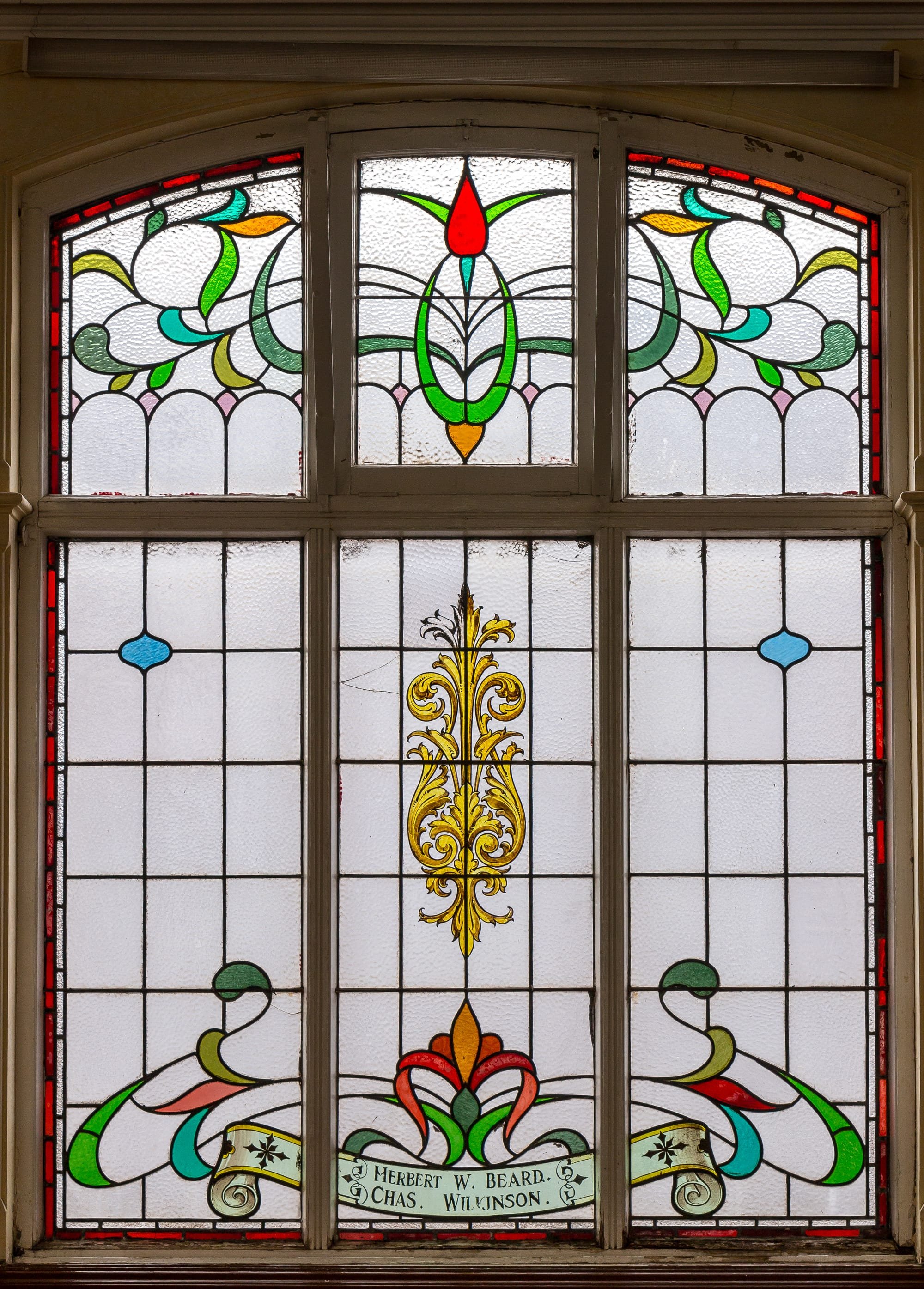 Information about his early life has been difficult to obtain.  Census returns show no mention of him so far so we can tell but what we do know is that Charles Henry Wilkinson was, we believe, born in 1891 at Osgodby near Market Rasen. We know little about his upbringing, but in 1914 he married, at Caistor, Alice King from West Rasen.

Charles joined the police force and in 1914/5 moved to Ashby, living firstly in Victoria Road and then in Alexandra Road. A daughter, Evelyn, was born in 1916.

After the war his wife returned to West Rasen with their daughter who married Richard Thompson of Grimsby in 1943. Mrs Thompson came to Ashby Wesley on the occasion of the centenary celebrations in 2007 and is here seen photographed standing next to her father's memorial window. 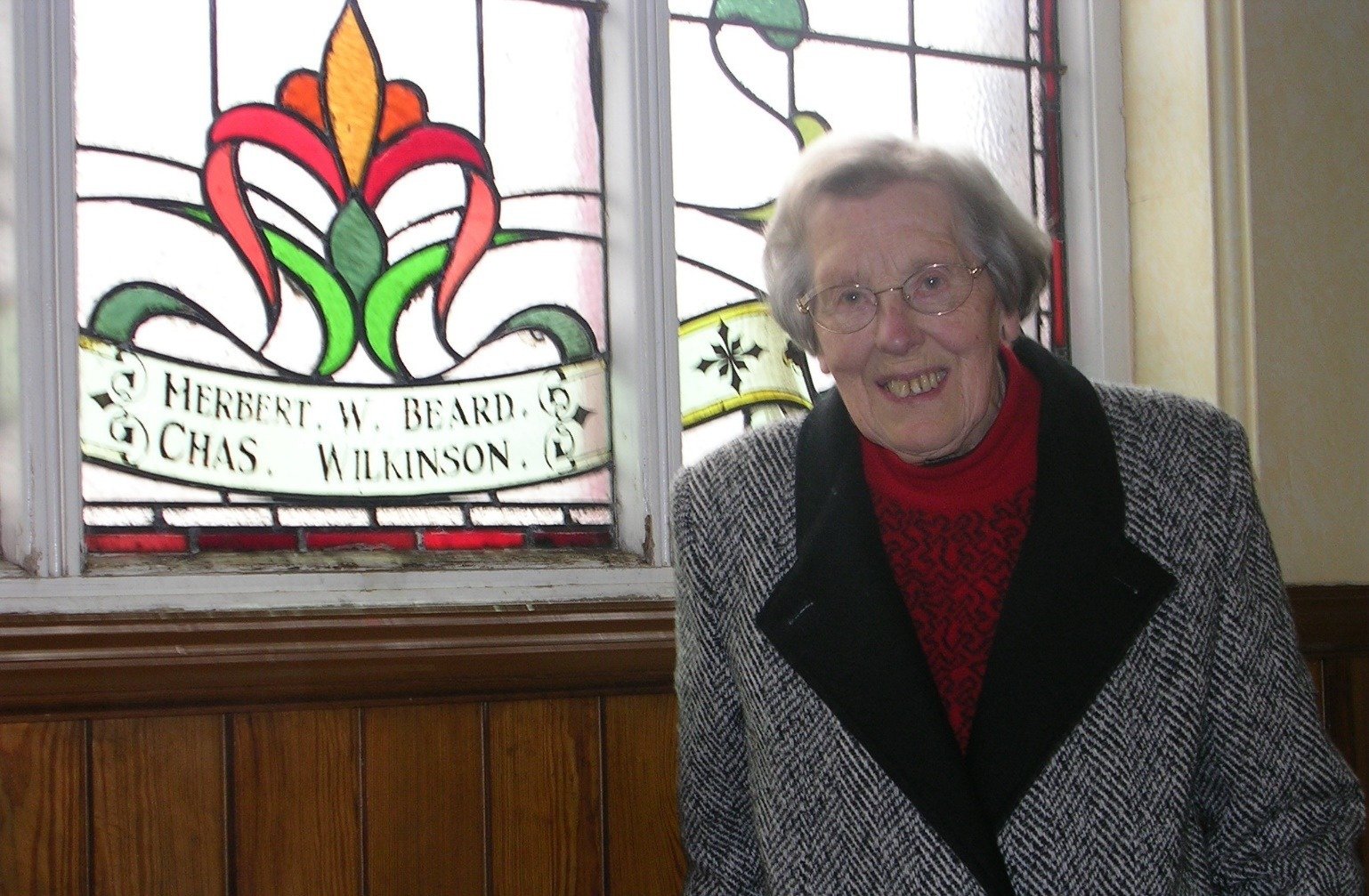 Charles joined the Royal Garrison Artillery Regiment (Service no. 74867) and at the time of his death on May 13th 1917 was serving with the “P” Anti-Aircraft Battery as a gunner.

He was “killed in action” during the battle of Arras of which the infamous 2nd battle of Bullecourt in which Herbert Beard was killed in action, was an important part.  We have no information as to where exactly he was stationed but we do know that he is buried in the Peronne cemetery extension. 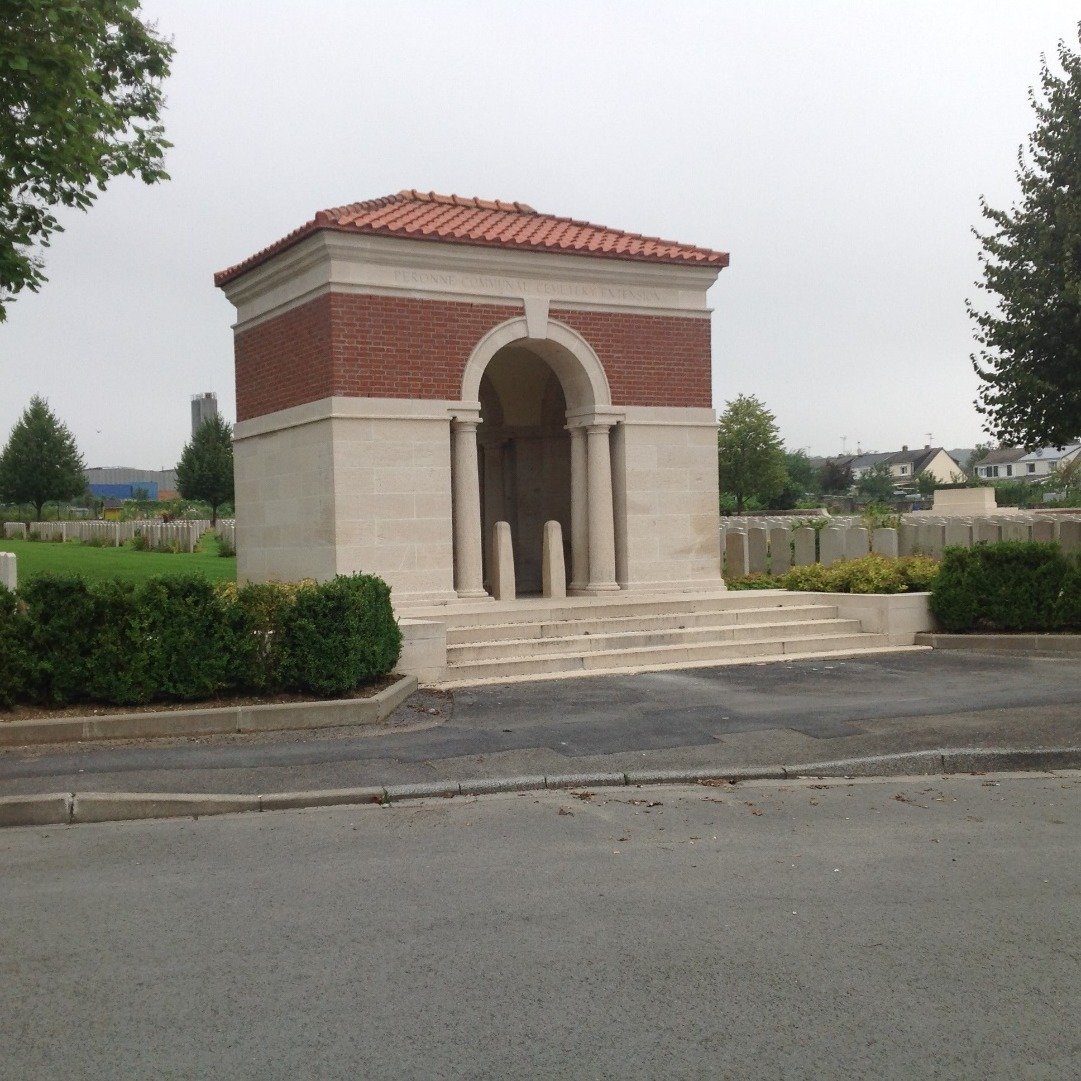 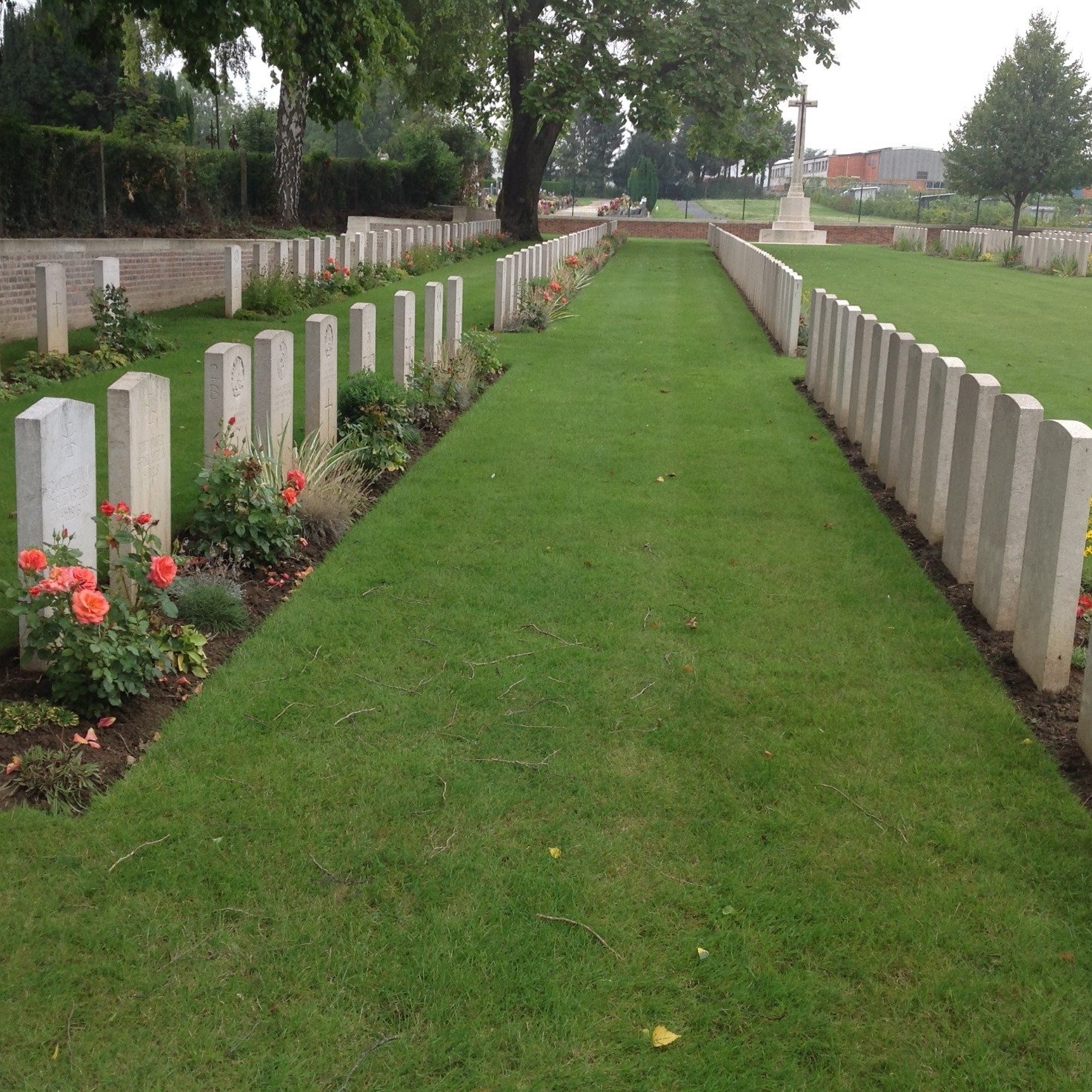 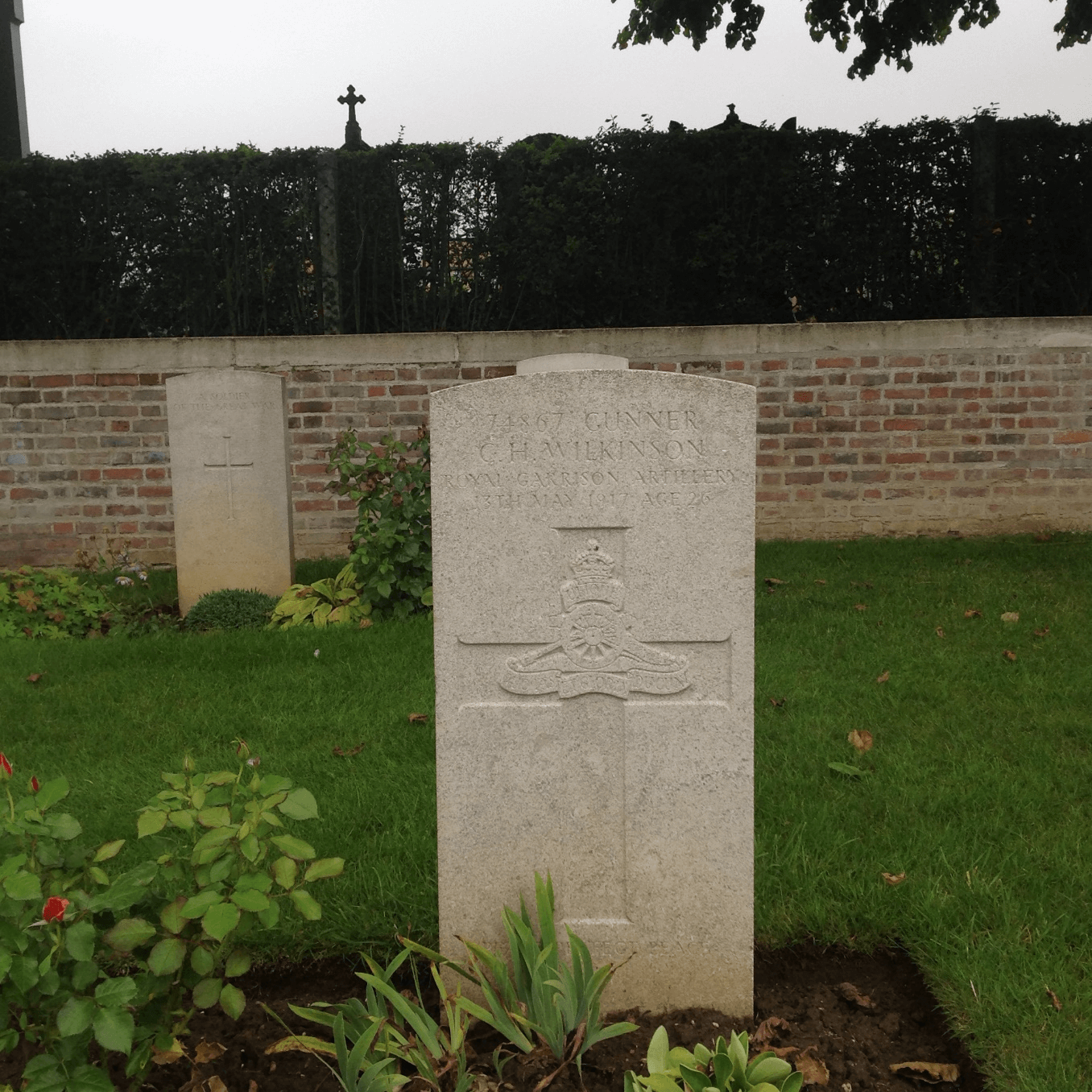 It is most likely that Charles was conscripted. At the outbreak of the War recruitment was based on volunteers and the Liberal government of the time was reluctant to introduce compulsory conscription. By the middle of 1915, however, the voluntary system was causing serious problems, both in the recruitment of the necessary numbers, but also because workers in vital industries, such as steel production and the railways were volunteering. A further appeal for volunteers was made by Lord Derby in October 1915. The response was good, but still insufficient. In January1916 a Military Service Act was passed and from March 2nd 1916 all unmarried men between the ages of 18 and 41 who had not already joined the forces, been deemed unfit or were in reserved occupations would be deemed to have enlisted. In May1916 a further Act enforced compulsory military service on “every male British subject who has at any time since August 14th 1915 been, or for the time being is, ordinarily resident in Great Britain, and who has attained the age of eighteen years and has not attained the age of forty-one years.” This came into effect on June 24th 1916. Charles more than likely enlisted as part of a Government policy of conscripting serving police officers of qualifying age and replacing them with recently retired officers.

In 1899 the Royal Regiment of Artillery was divided into two sections, the Royal Horse Artillery and Royal Field Artillery dealing with mobile gunnery and the Royal Garrison Artillery with heavier guns firing from fixed positions. As guns grew larger and heavier and especially after the war developed into the stalemate on the western front the work of the RGA became more important. They were responsible for the heavy barrages which preceded any attack.

After the outbreak of war in 1914 the RGA  took over from the Admiralty the responsibility for anti-aircraft defence, initially against the lighter than air Zeppelins. The first units overseas were sent to France in September 1914. The Great War, however, was the first in which heavier than air flying machines were used to any extent. Initially used for aerial photography and range finding they progressed to dropping bombs and eventually aerial combat. The RGA formed new Anti-Aircraft Batteries to combat the threat and by the end of 1916 there were 183 sections of which 74 were in France. Each section consisted of 43 men of which there were two gun detachments of 12 men each. Charles Wilkinson would be one of these. 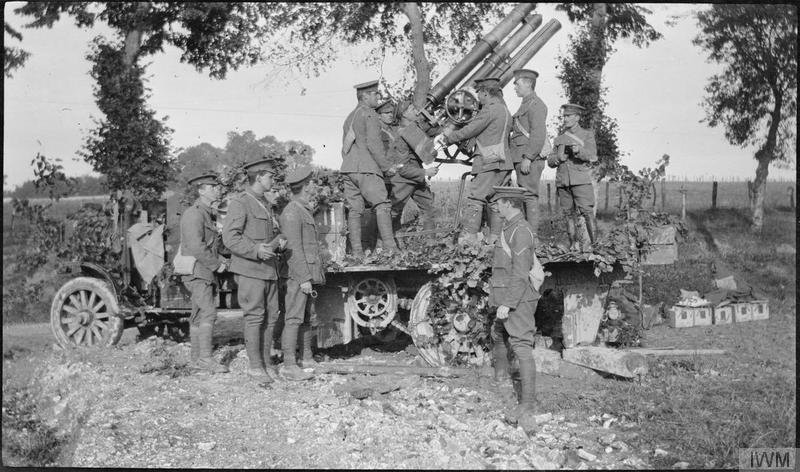 The Somme and the Western Front in 1917

Following the horrendous fighting in 1916 the German forces had created new defensive lines to the west of the Somme battlefield (known to them as the Siegfried position and to the British as the Hindenberg line.) To these they retreated in February 1917 leaving a large war-ravaged area behind them. Across this the British fought their way and further heavy losses occurred on both sides. The Germans were unable to make any progress either and the situation developed into a deadly stalemate.

In April the British launched a major attack to the north of the area, around Arras, and the French (The Nivelle offensive) in the south. Although there was some success and at Arras the British artillery distinguished themselves achieving a 99% detonation rate on the accurate firing of 2.7 million shells, both attacks failed to break the stalemate and the Germans from their fortified positions continued the war of attrition. The failure of the Nivelle offensive led to mutiny and near collapse in the French army and the British were forced to take over more and more of the front. Somewhere in the midst of all this Charles Wilkinson laid down his life for his country.

In July 1917 partly to relieve the pressure on the French army to the south and following a successful attack at Messines the British launched the Third Battle Of Ypres, doomed to go down in history as the horror of Passchendaele. 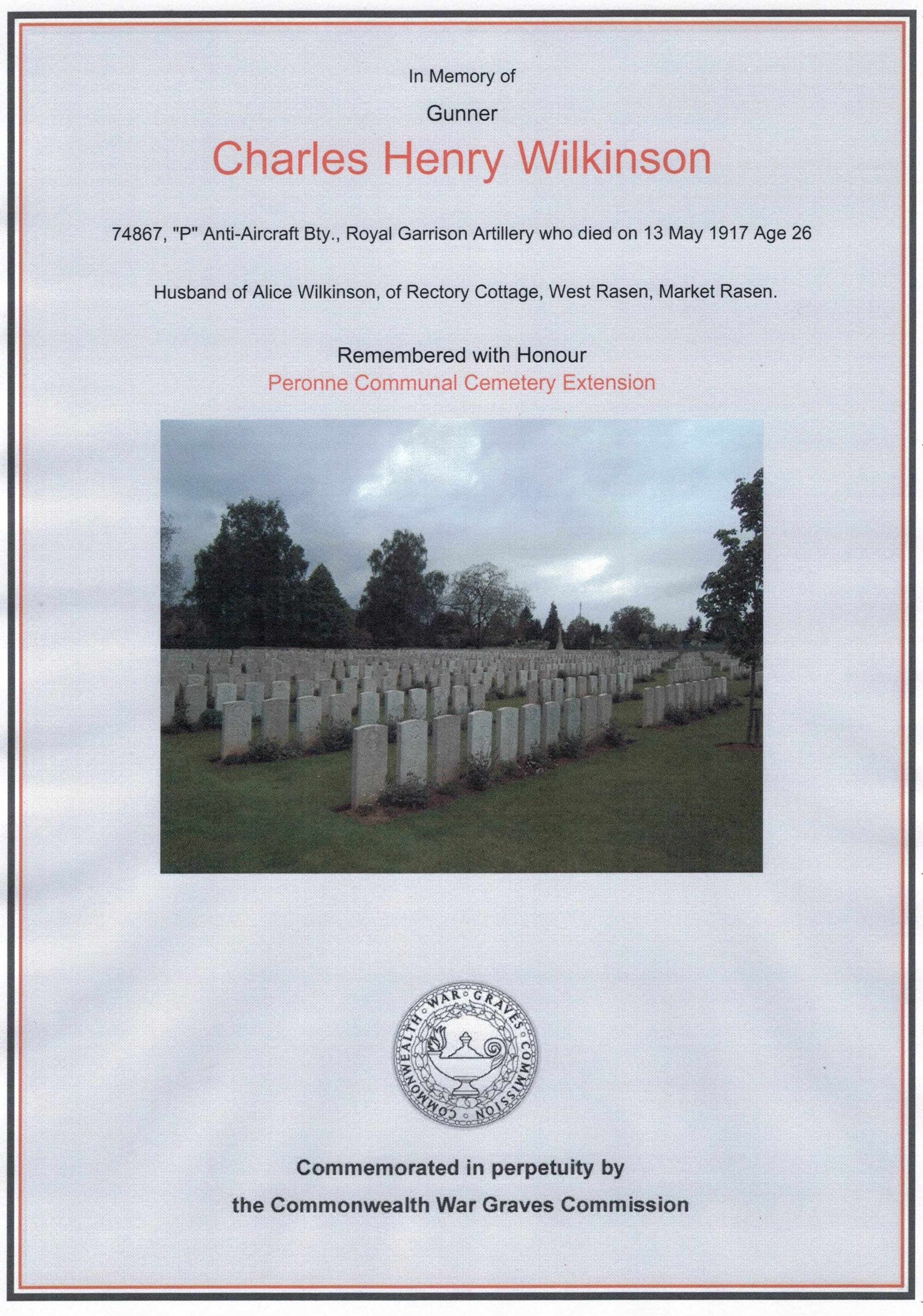