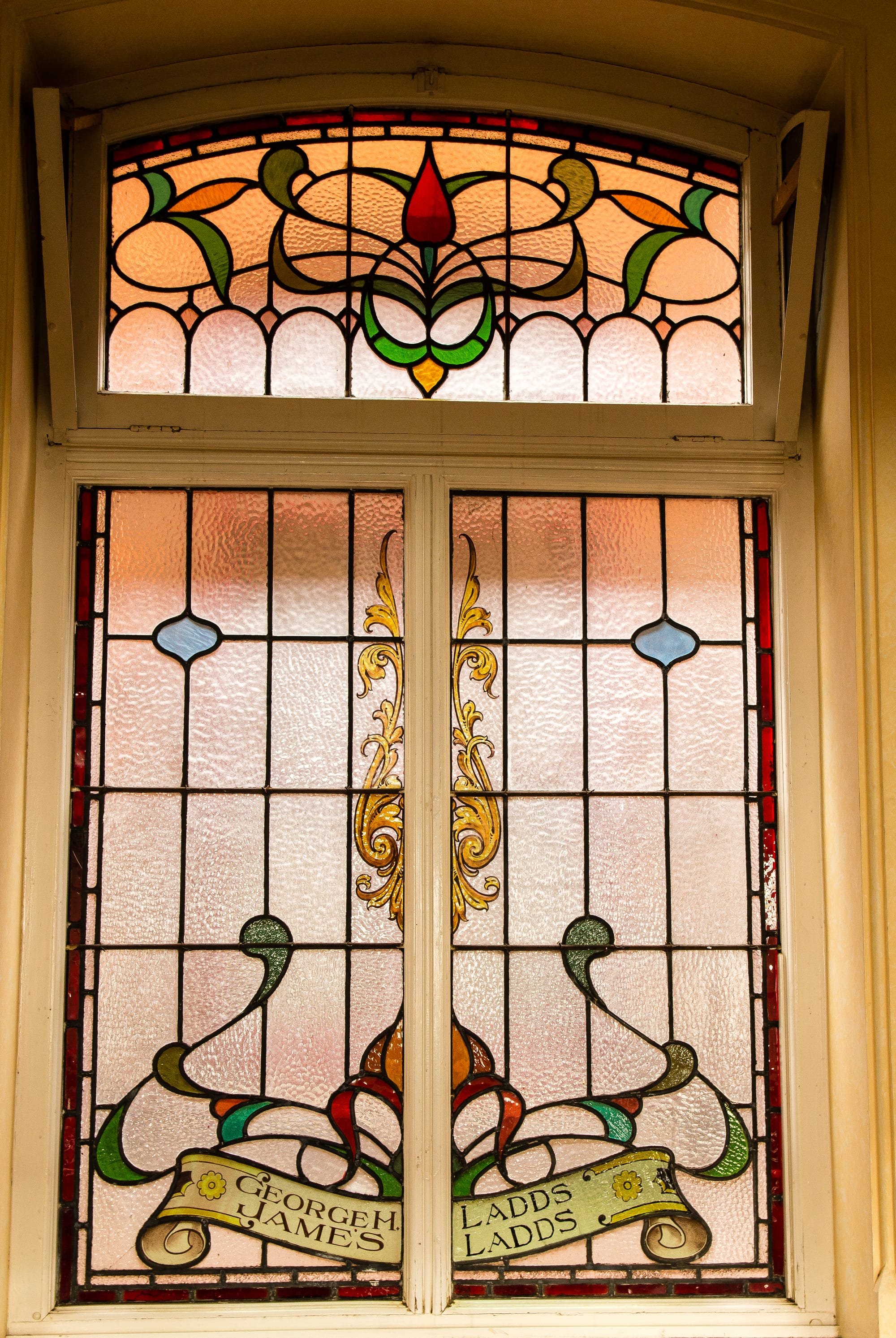 James and George were both born in Waddingham. George on the 23rd November 1893 and James on the 21st August 1896. His parents were Robert and Mary and the photo below shows them with their four children in front of their house. The photo shows Robert and Mary seated, James on the right with his older brother George and the younger children, Sarah and baby Francis. 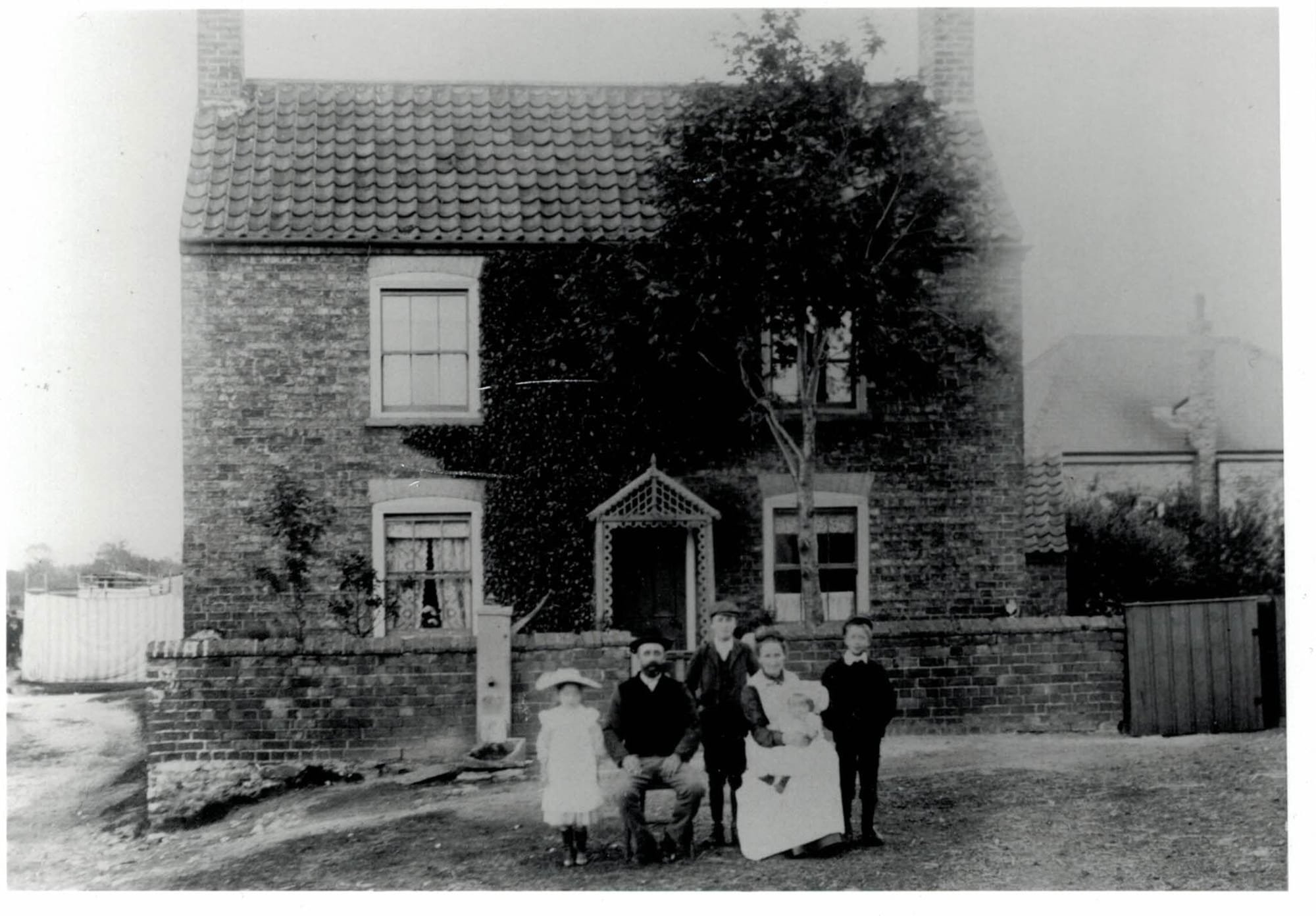 This photo along with most of the family history material in this booklet has been preserved by Brenda Whittingham and her husband Clarence. Brenda is their niece and is in possession of many family heirlooms as well as documents and photos.

This extract from the 1901 census shows James and George living with their parents Robert and Mary together with younger sister Sarah and their grandmother Sarah Major. In 1911 the family is still living in the same house in Waddingham but as we can see from the extract below George has left home. The census for the same year shows that he had found work as a waggoner on a farm with a farmer called George Page but was still living in the parish of Waddingham. 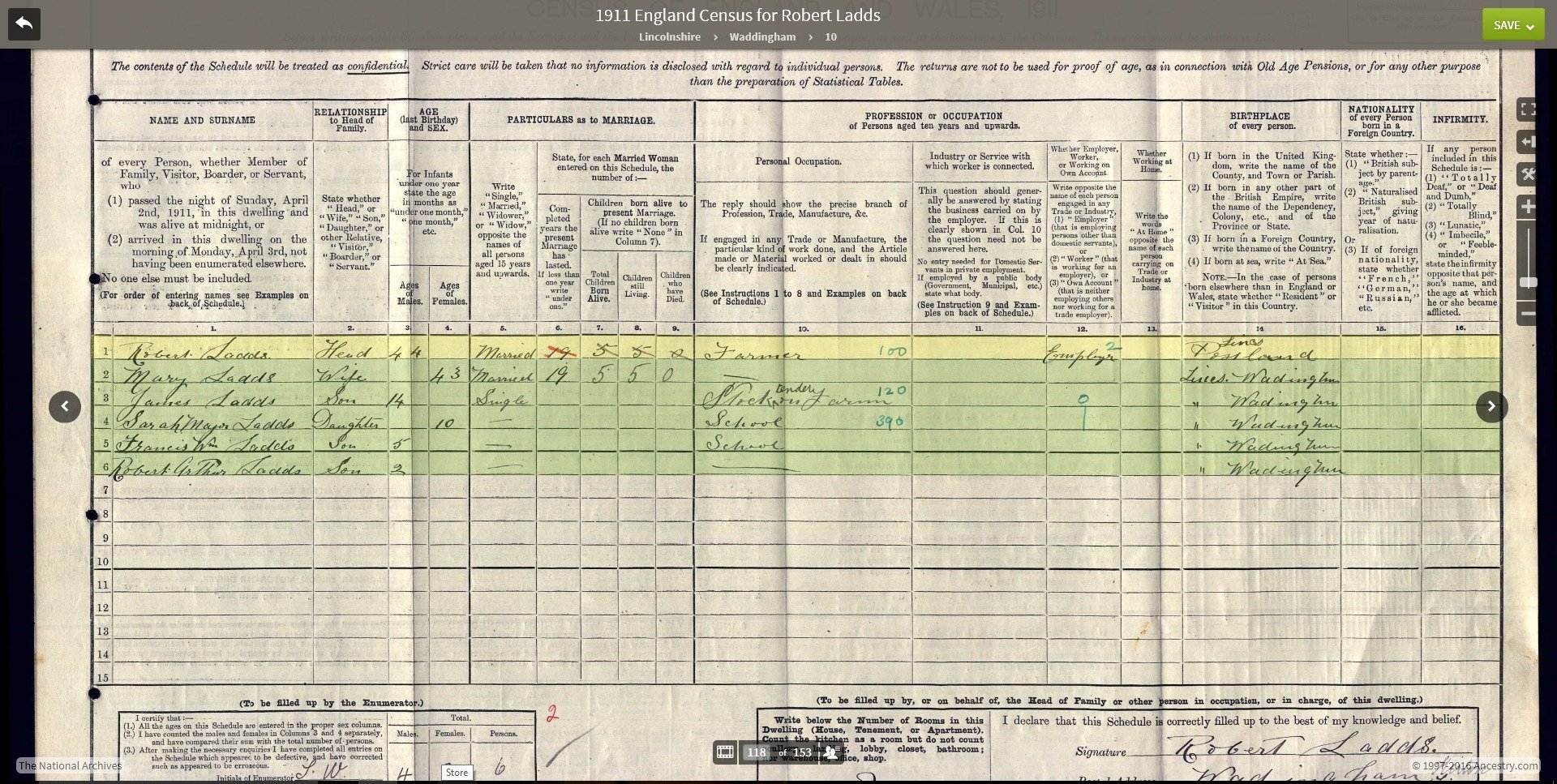 The photo below shows the Ladds family, a little older now (see how young Francis is now standing) but clearly in front of the same house at Waddingham. 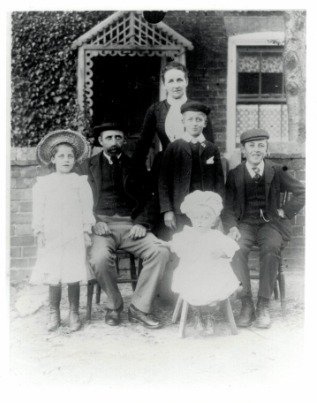 In 1914 the family moved away from Waddingham and we find them living at Beech Tree Villas on what is now known as Ashby Road but was then called Brumby Road. Beech Tree Villas, a pair of semi-detached houses at numbers 324 and326 must have been new housing then and probably represented a step up in the world for them. The house is still there and from the exterior at least, appears to have changed very little apart from the natural wear and tear of time.

We do not know for certain that the Ladds family were members of the congregation at Ashby Wesley but as George was working in Waddingham and obviously not attending the Sunday School the fact that both boys are commemorated on one of the windows seems to indicate that they were.

Robert and Mary may not have been the first parents in Ashby to suffer the loss of two sons in the war, but they were the first, and sadly not the last, associated with the church.

After the war the family moved to various locations around the area and finally settled in Yaddlethorpe.

As mentioned above, George’s attestation papers have survived and been handed down through the generations of the descendants of his family. 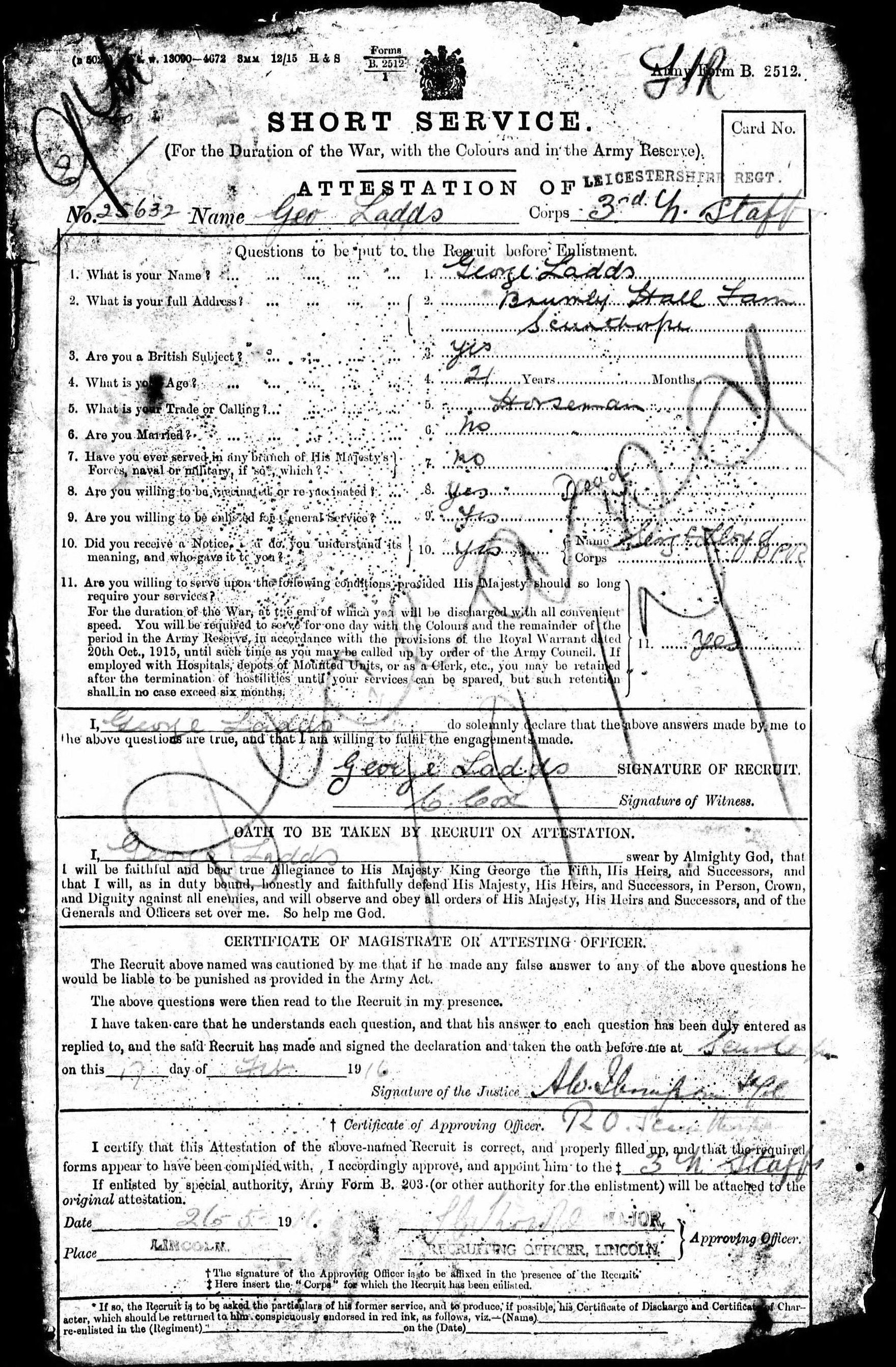 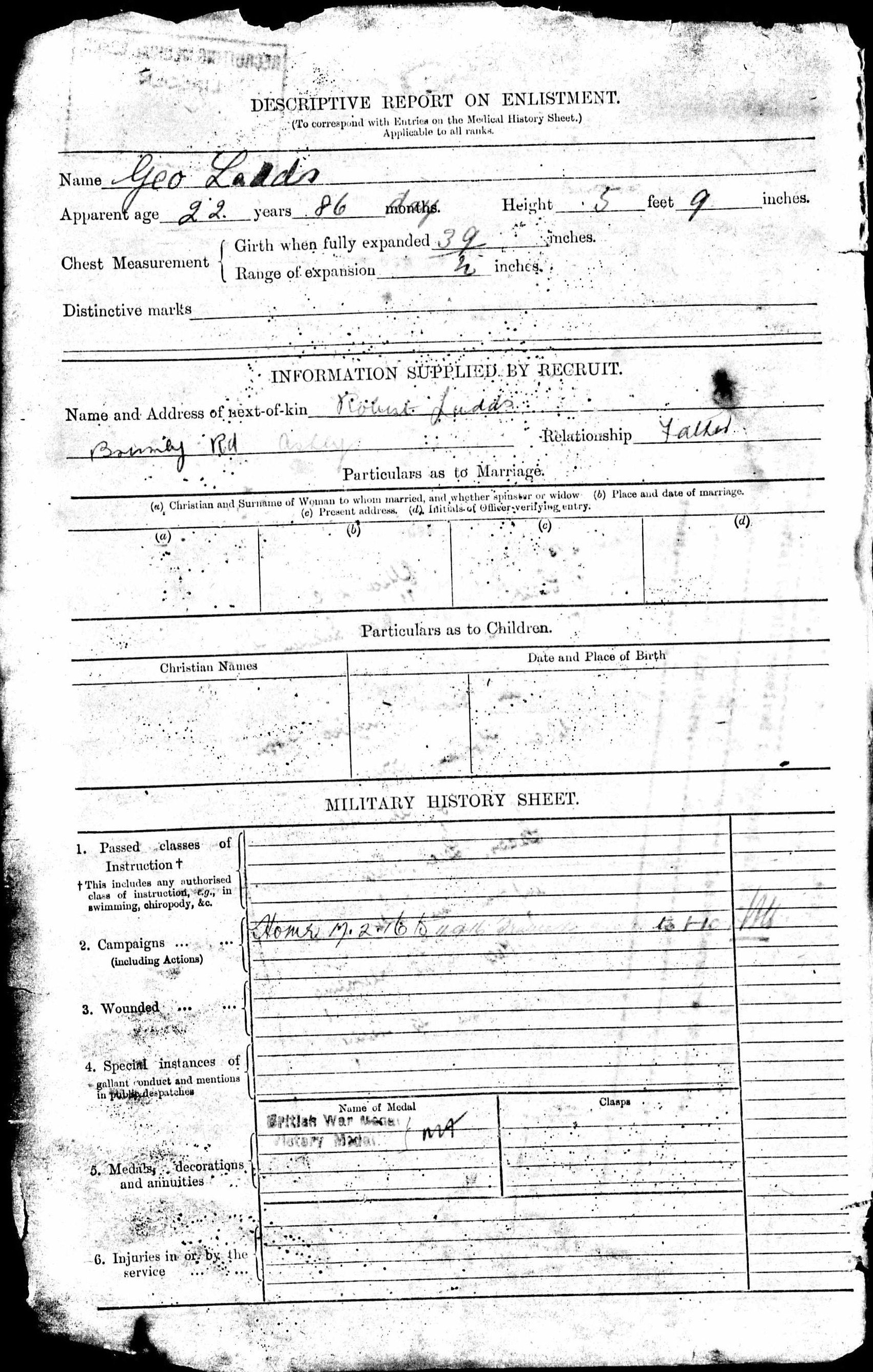 These two documents give us many details about George and we learn from them that he was assigned to the Leicestershire Regiment, which saw service on the Western Front.

The Front Line (purple dashed line) extends to Passchendaele, several miles north east of Ypres, by the end of 10th November 1917 after the Allied offensive of the Third Battle of Ypres.

From early in 1916 it was the intention of the Commander-in-Chief of the British Expeditionary Force (B.E.F.), Field Marshal Sir Douglas Haig, to break out of the Ypres Salient. Having successfully secured the high ground of the Wytschaete-Messines Ridge in the Battle of Messines (7th-14th June) the plan for the next operation was to advance against the German Front Line east and north-east of Ypres. On reaching the strategically important high ground of the Passchendaele Ridge to the north-east of Ypres, the British intention was to continue to push westwards, cutting off access for the German forces to the Belgian ports of Ostende and Zeebrugge. German forces were in control of these ports and using Zeebrugge in particular for shipping and submarines (U-Boats).

A British offensive in Flanders before the autumn weather closed in would also draw the focus of German Army commanders away from the Aisne battlefield. The large-scale offensive on the Chemin des Dames Ridge in April of 1917, planned by the French Commander-in-Chief, General Robert Nivelle, was a failure. Very high casualties for the French Army resulted in a struggle to maintain discipline in some of its units and soldiers mutinied. 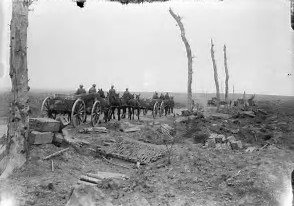 (Troops moving through the battlefield)

TIn Flanders, the Third Battle of Ypres was launched on 31st July. The British Fifth Army commanded by General Hubert Gough advanced in a north-easterly direction away from its positions near Ypres with the Passchendaele Ridge in its sights. The French First Army was on its left. The British Second Army, under General Herbert Plumer, was on its right, holding the ground won during the Battle of Messines a few weeks earlier. Some ground, approximately two miles, was gained on the first day, but that night rain began to fall. The ground all around the British attackers quickly turned into a quagmire. Churned up by the artillery bombardment of the German Front Line and rear areas, the ground the British were now having to advance across was badly damaged and filling up with of rainwater which could not drain away through the heavy clay soil. Added to this, several small streams flowed through the area and their natural drainage channels had been destroyed. Due to persistent rain over the next few weeks the whole operation became literally bogged down in thick, sticky Flanders mud. Conditions were so bad that men and horses simply disappeared into the water-filled craters.

The German defensive line had been fortified during the previous months in their expectation of an attack here. The British advance turned into a battle of 8 phases, inching closer to the Passchendaele Ridge in a series of actions with limited objectives. The capture of the Passchendaele Ridge eventually took over 8 weeks to achieve.

The cost to both sides in human casualties was immense at between 200,000 and 400,000, although exact figures for British and German casualties continue to be a matter of discussion for military historians. The great tragedy for the British Army and the Imperial Forces of Australia, New Zealand and Canada, who suffered so many losses in the fight for the few miles from Ypres to the Passchendaele Ridge, is that only five months later almost all of the ground gained in the mud and horror of the battles for Passchendaele was recaptured by the German Army during its April offensive in 1918 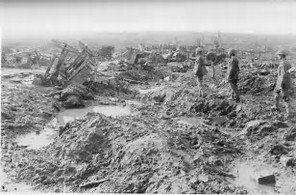 (The devastation of the mud of the battlefield)

Battle of the Menin Road Ridge

Many thousands of the casualties on both the Allied and German sides were killed in the fighting during the Third Battle of Ypres. Thousands were listed as missing in action and whose remains, if found, have never been identified.

George died in the battle for Polygon Wood, about which much has been written.

Below is a copy of George’s medal index card and his certificate of commemoration issued by the Commonwealth War Graves Commission. 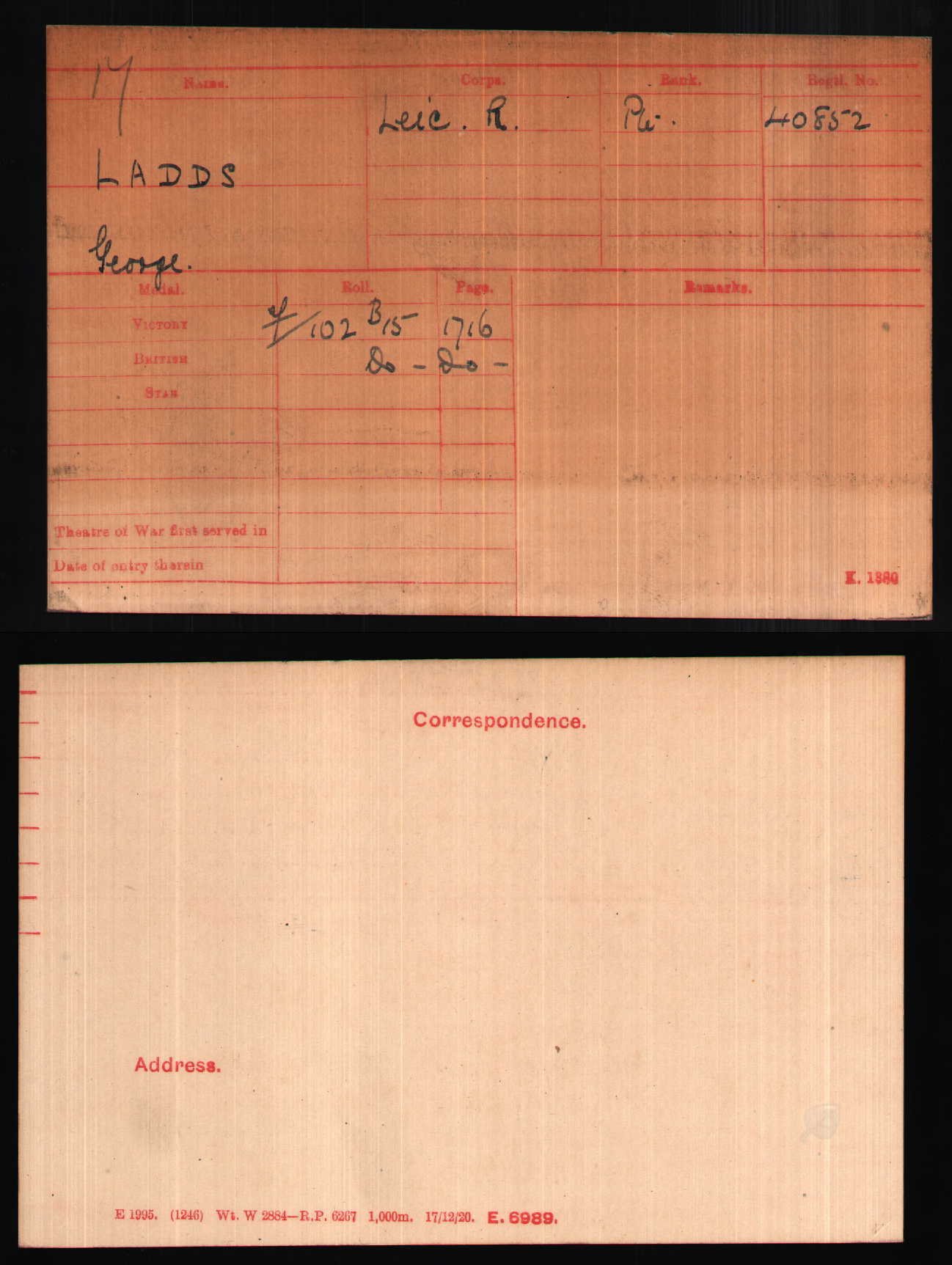 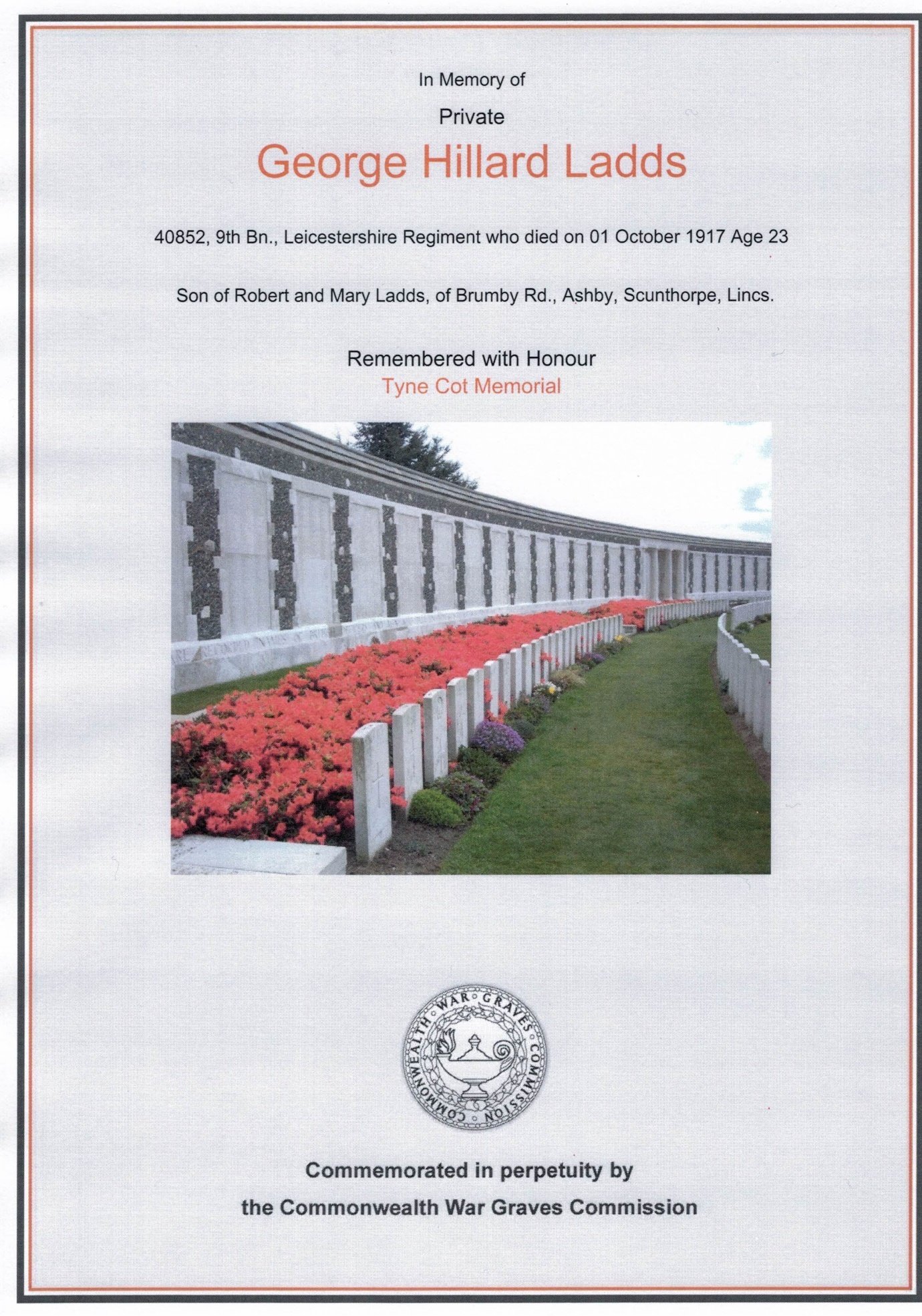