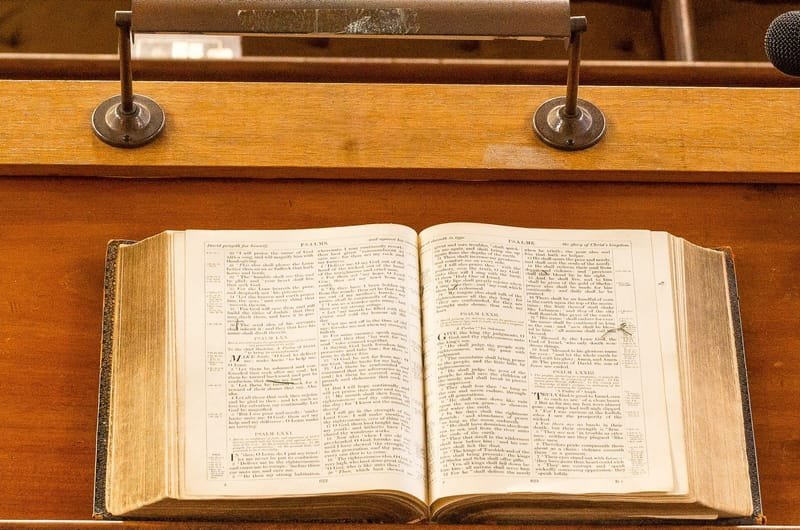 The first record of a Wesleyan Methodist society in Ashby dates from 1776 when the minister of the Gainsborough Circuit, John Easton, licensed the house of John Lidgit as a place of worship. The following year the same minister similarly licensed the house of John Scurber for worship. The society continued to meet and was transferred to the newly formed Brigg Circuit in 1815. Reflecting the growth of Scunthorpe due to the development of the iron industry from 1860 the circuit became Brigg & Scunthorpe in 1906 and Scunthorpe & Brigg in 1909. In 1920 the societies of Scunthorpe, Ashby, Old Brumby and Frodingham were constituted as a separate Scunthorpe Circuit, which following union with the Primitive Methodist and United Methodist Churches in 1932 became known as the Scunthorpe First and then Scunthorpe (Trinity) Circuit. In 1959 this amalgamated with the largely ex-Primitive Scunthorpe and Winterton Circuit to form a Scunthorpe Circuit which in turn amalgamated with the Epworth & Crowle Circuit in 2010 to form the current Epworth & Scunthorpe Circuit. 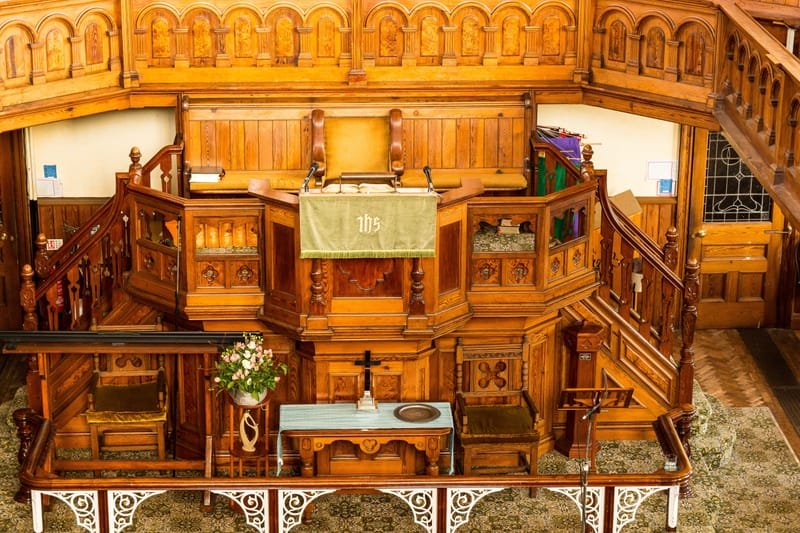 The society continued to meet in a variety of houses until they obtained use of a chapel which had been built in 1826 for the Primitive Methodists, the date stone from which can be found in the Church entrance. This stood on the opposite side of the road from the present church and was purchased in 1832. It was used as a chapel until 1870 and as a Sunday School until 1893. It was then put to a number of uses but when it was pulled down in 1953 it was being used by the Scouts. (The Primitive Methodists built a new chapel in 1830, enlarged it in 1855 and replaced it with the Kendall Memorial Chapel in 1884-5 which with the addition of a Sunday School in 1893 was used until 1960 when it was demolished.) The Wesleyan Methodists, reflecting the growth of the township due to the influx of people connected with the iron industry and increasing attendance, built a new chapel to seat 200 in 1870. Such was the growth that it was enlarged to hold another 100 in 1882. The Sunday School alongside, the present large hall, was added in 1893. The chapel was still crowded and in 1899 a plot of land was purchased on the other side of the Sunday School on which to build a new church. In 1904 the church trustees were advised that they would be receiving a substantial legacy from the estate of the late Mr Everett Jackson (the Jackson family having been long associated with the society) and a local Methodist architect, William H. Buttrick was asked to design a new church to seat 600. After tenders from building firms proved too high it was decided that as much of the building work as possible would be done by the members of the church under the guidance of Mr Arthur Watson, Trust Secretary and local builder. In May 1906 the men of the church rolled up their sleeves and started to dig out the foundations of the current building. 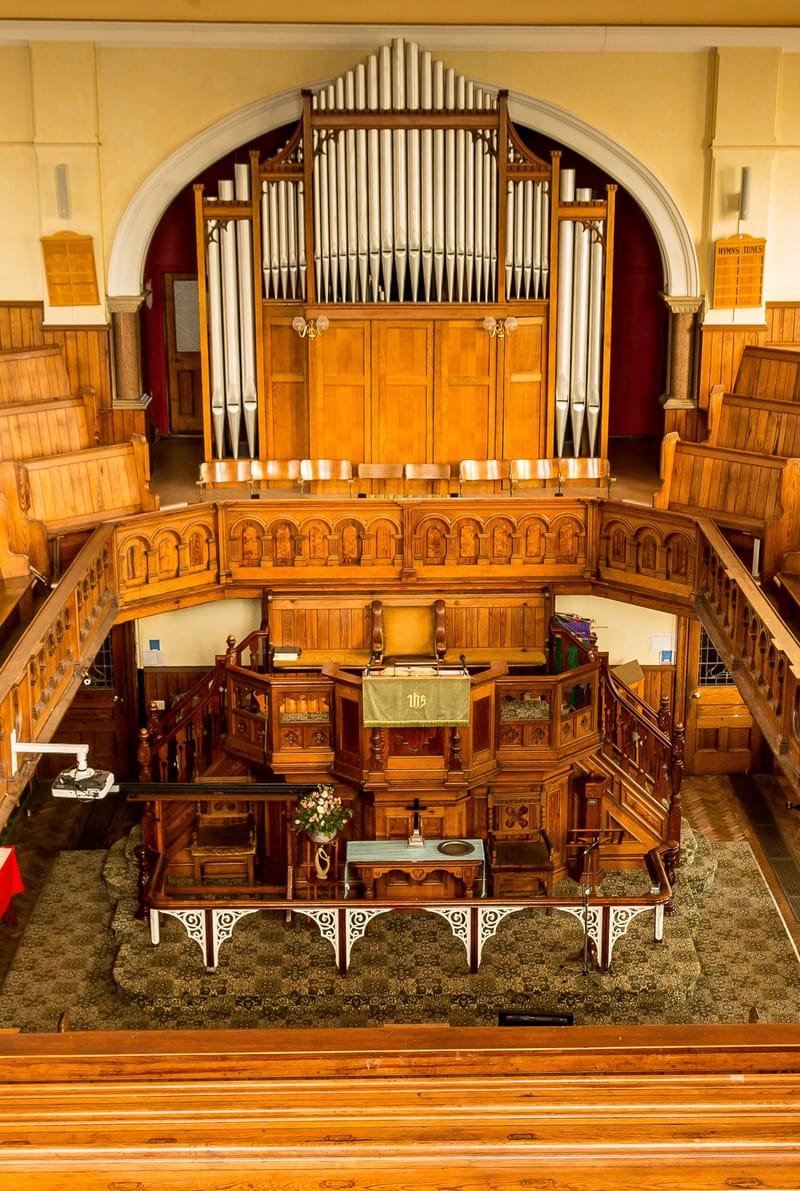 On July 10th 1907 the present church was opened with two services, a tea and an organ recital. It must have been a wonderful day. It was reported that the chapel had cost £3140, inclusive of £305 for a new pipe organ. Most of the cost had been met, but a sizeable debt remained. (The promised legacy was not received until 1925!) The chapel itself was probably the last of its type to be built. There was no hint of the gothic style popular at the time. A brick box with stone dressings contains a fully pewed two storey sanctuary with a gallery all round, a large rostrum pulpit and the organ in a chamber behind the pulpit and in front of the choir vestry. Downstairs were a minister's vestry, lavatory, coke store and boiler house. The windows and fittings show the influence of the art nouveau movement, although sadly the superb art nouveau gates and railings across the front outside disappeared in the 1939-45 War. The pews are numbered and on the hymn book ledges are the marks where there used to be brass fittings holding cards showing the name of the family which was renting that particular pew. The more expensive pews with doors, curtains and hymn book boxes can be seen at the back. At the front were free seats, facing sideways, some beyond the pulpit, which were removed in the second world war. The collection of pew-rent was discontinued in 1942 in favour of weekly collections. In the entrance lobby is a tablet to the memory of Everett Jackson and there are memorial windows to the Jackson and Franklin families. Notwithstanding a claim made in one history of the church there is no memorial to Arthur Watson, but the whole building is a memorial to his patience, guidance and perseverance. In the ceiling can be seen the grilles which were placed above the original gas chandeliers to let out the fumes. The trustees had seen the erratic performance of electric light in the Scunthorpe chapel and decided to stick with gas. Electricity was not installed until 1925. The original church organ was removed in 1959 due to woodworm and for a number of years an electronic instrument was used. The current organ with detached console was installed in 1973 using pipework from a Conacher organ removed from another church. In 2003 the organ was revoiced and extended. 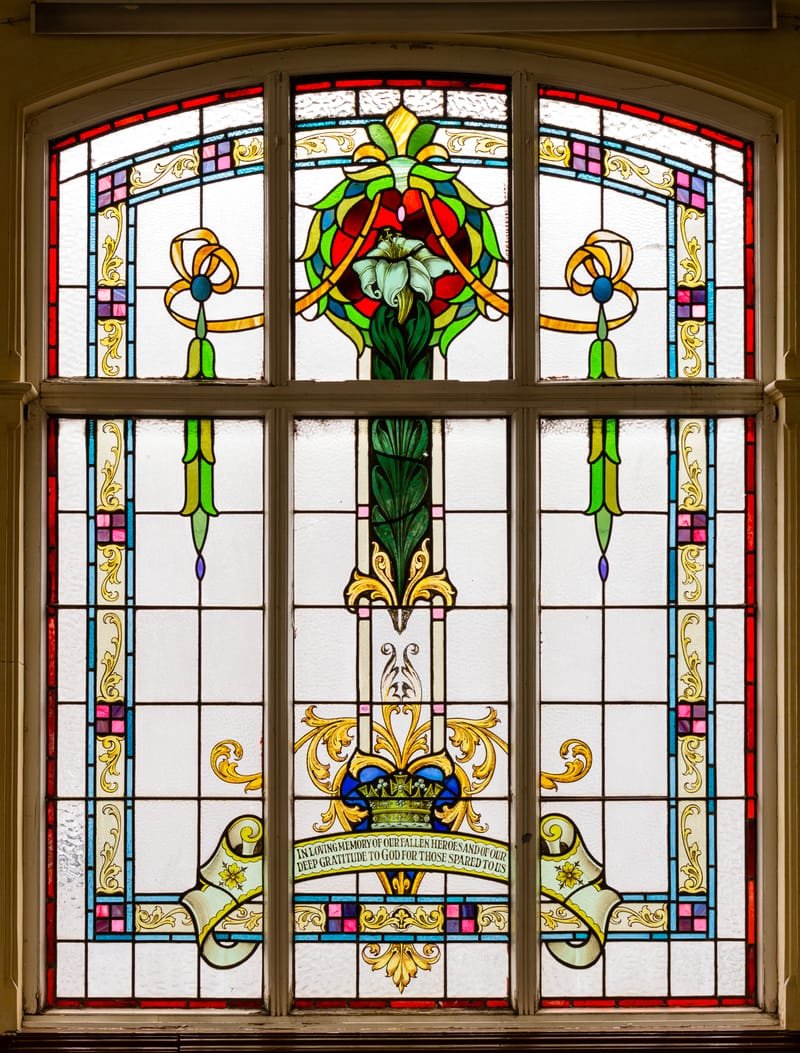 One of the best features of the church is the provision of large windows to let in as much light as possible. Following the 1914-8 War when so many young lives were lost the church decided to have as a permanent memorial four dedicatory windows and sixteen windows showing the names of 27 men connected with the church who had given their lives. A Victory Bazaar was held and the windows installed in 1919. We believe that this is a unique method of commemoration. In other churches plaques were installed and sometimes a particular family donated a window, but here the whole church contributed and the whole church became the memorial. Sadly the outsides have had to be covered to protect against vandalism, but the church is currently looking to install secondary glazing to improve the appearance. 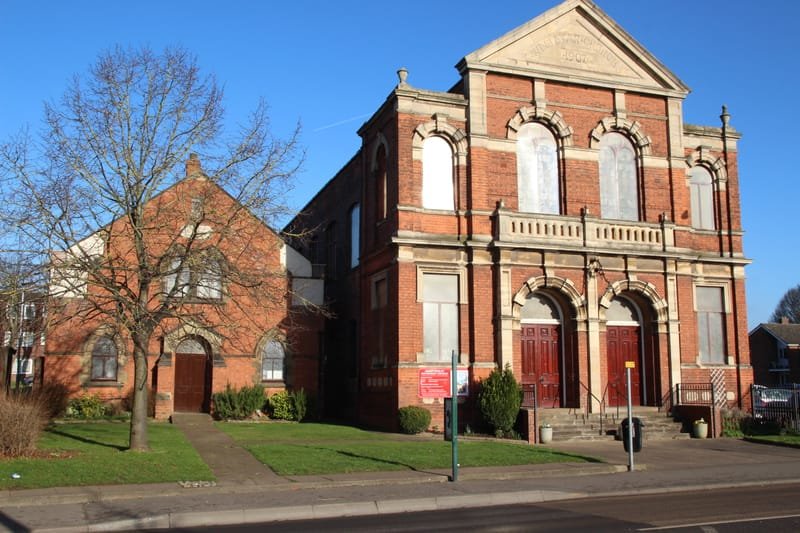 The original school hall of 1893 was extended back in 1928 and re-ordered internally in 1962 in connection with the building of the Youth Centre, consisting of three rooms, kitchens and toilets across the back of the building. In 2015-6 a new hall was added at the rear, including a much larger kitchen and much improved toilet facilities. At the same time the rear entrance was remodelled to let in more light, allow easier access and look more welcoming. In 2016 new amplification and projection systems were installed in the church and hall.