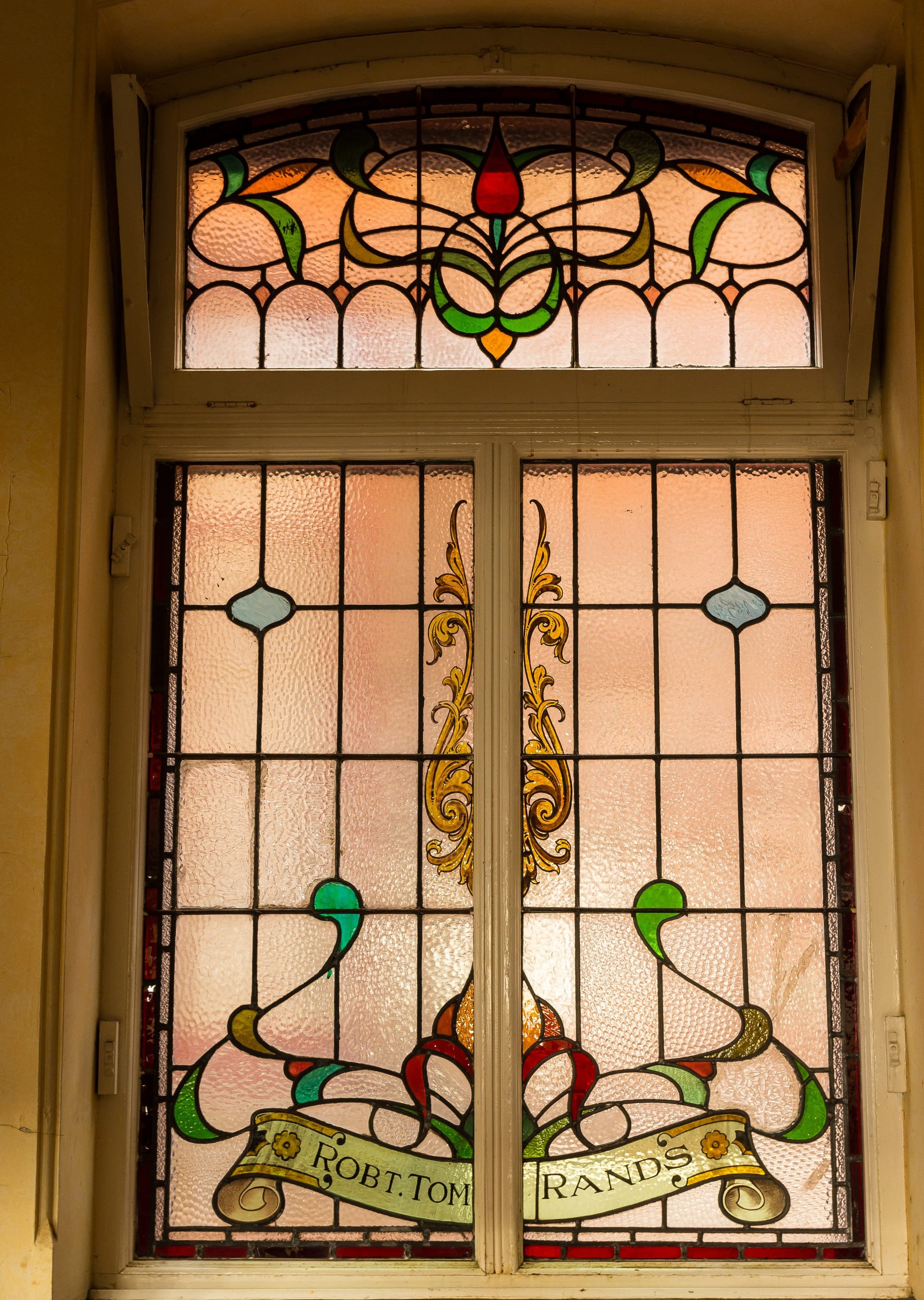 In 1861 she was living at West Halton, working as a dairy maid for a farmer named Chatterton.

They were married at the beginning of 1866.

In 1881 we appear to have a record of them living at Ashby Ville in Emmanuel cottages but Robert Snr. is registered under the name of Richard and his occupation is given as Rat Catcher. All the other details for the family are the same in 1891 except for the addition of Robert Tom and the absence of some of his older siblings who have presumably left home by then.

So far we have been unable to discover Christiana’s maiden name or any details relating to her marriage to Robert snr.

Robert married Mary Simons Weston late in 1903 and by the time of the 1911 census hey were living in Lindum Street and had three children. Robert was working as an ironstone miner.

We believe that after the war Mary re-married and went to live in Grimsby. Her two daughters were married there but we have been unable to trace any further descendants.

Mary was born in West Ham and lived on Florence Street in the district of Plaistow although her parents were originally from Brigg and Grasby. 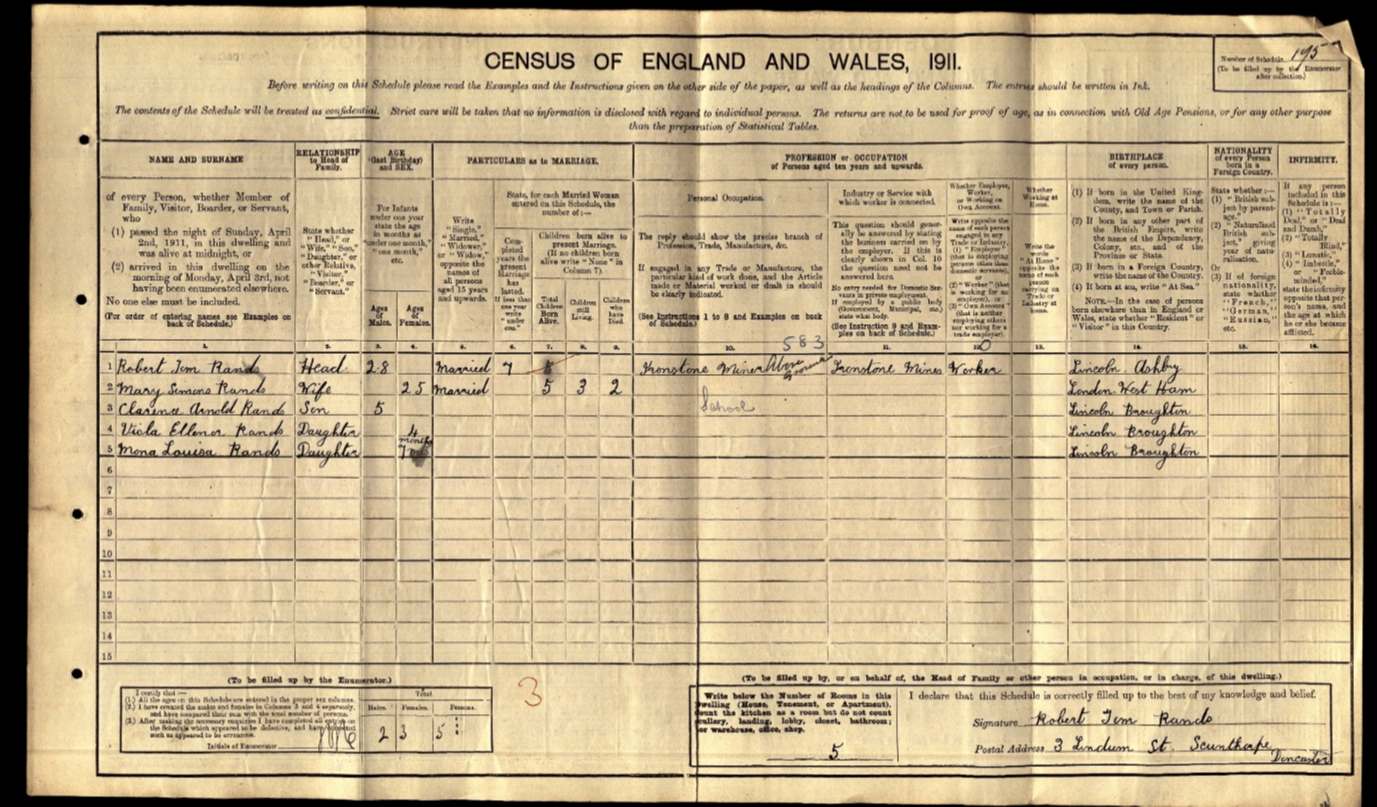 The plaque pictured on the next page is now on the wall at the North Lincolnshire Museum. It was originally located at Lysaghts steel works on Normanby Road and from it we learn that Robert changed his job sometime between 1911 and 1915 since he is shown as working on the blast furnaces. 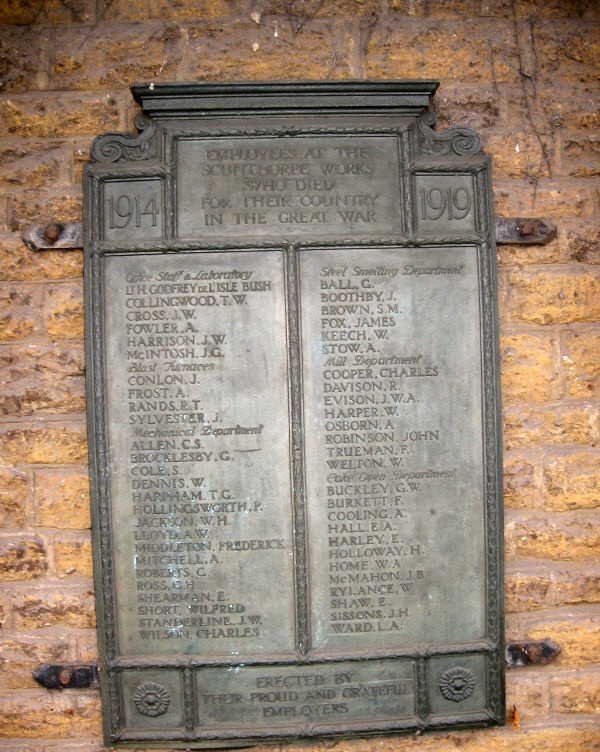 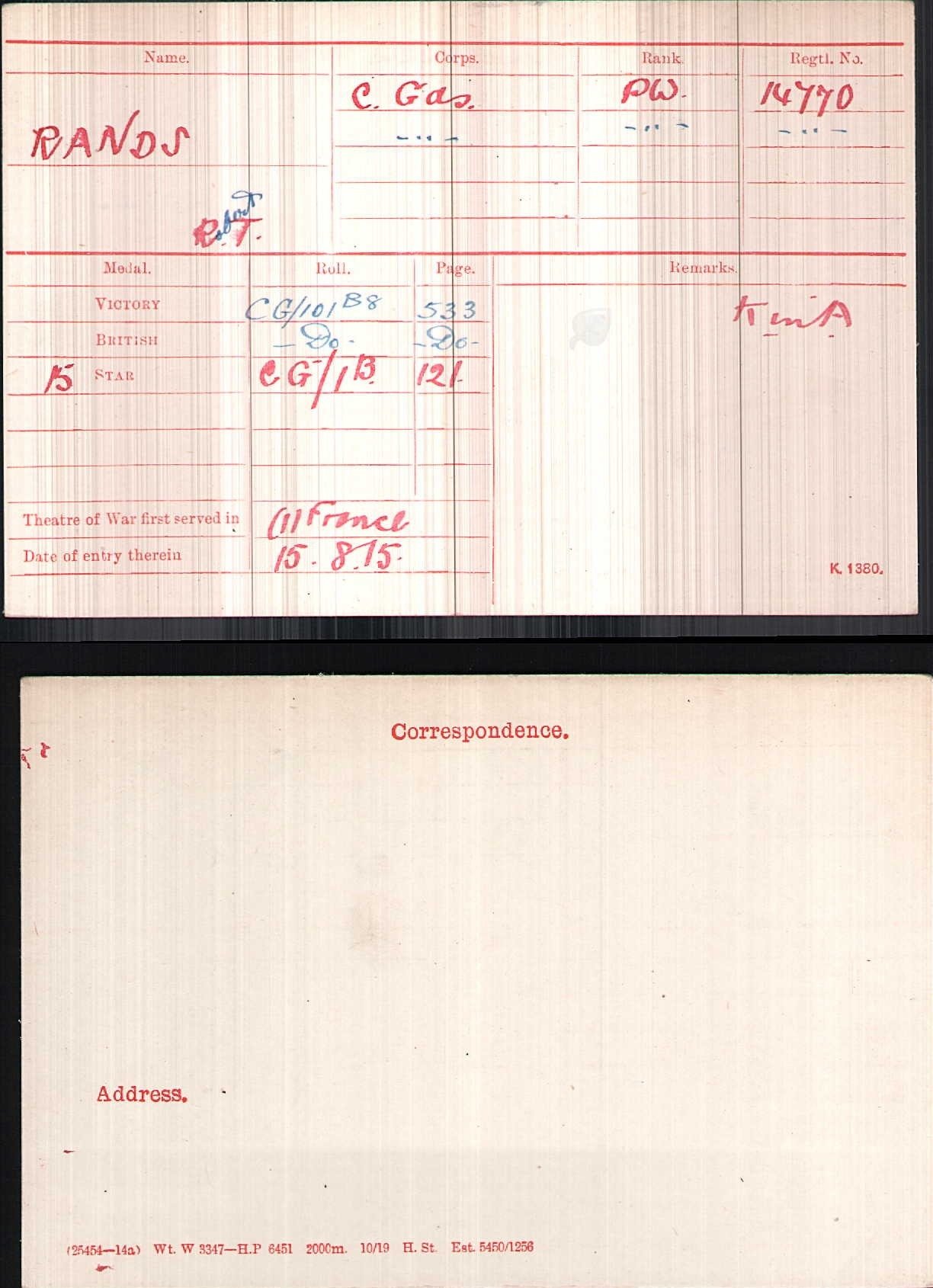 Robert served in the 1st Battalion of the Coldstream Guards. We can tell from his regimental number that he enlisted in January of 1915.

As his medal record shows he went out to France with the battalion on the 15th August 1915.

It seems that Robert served with the Guards division right through the war on the Western front and must have seen active service in most of the well-known major battles of the war. All of the details of the service of the battalion can be found in the war diaries relating to period. At the end of March they were involved in the action around the Hindenburg Line near the villages of Hamelincourt and Boiry which lie between Arras and Bapaume.

On the day of Robert’s death the war diary of the regiment  reads as follows:-

“27th All through the day the enemy shelled heavily and in the evening he made three or four bomb attacks up the Sunken road at the junction of Nos 3 and 4 Coys. which were beaten off. (Bombs were what we now call hand grenades). Lt G Bayzand M.C. and Lieut A.G.R. Fowler M.C. were wounded by M.G. bullets, neither reported serious. At night the 2nd Brigade was relieved by the 1st Brigade , and was supposed to go into the Divisional Reserve but owing to the 31st Division on our right having retired we had to take over part of the line to the right.. Relief was complete by 4.am. Order of Companies in the new line was 4 right, 3, 1 with No 2 in Support. Bn. H. Qrs. was established in BOIRY. The 3rd Grenadier Guards were on our right.

Heavy shelling throughout the day. A direct hit secured by the enemy on No3 Coys. H Q killed 3 men and wounded 5 others as well as Sgt. Hudson and 2nd Lt. G. Baring.

It seems probable the Robert was one of the three men killed.

Map showing the front line after the German Spring offensive of 1918. 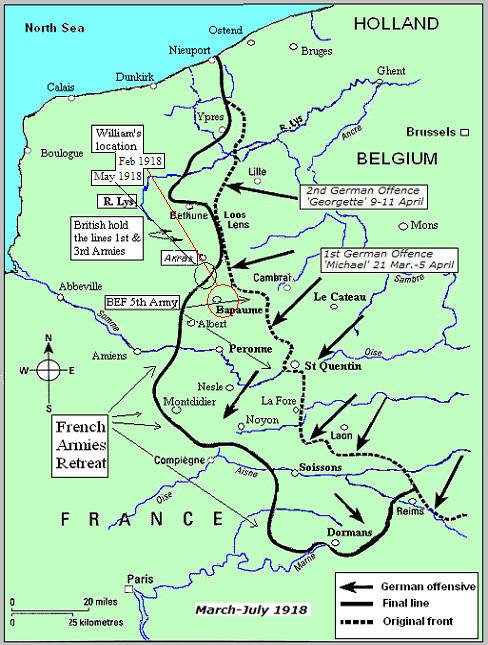 Robert is buried at the Buquoy Road Cemetery in Ficheux. 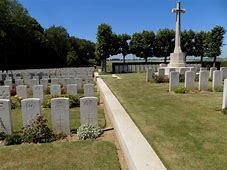 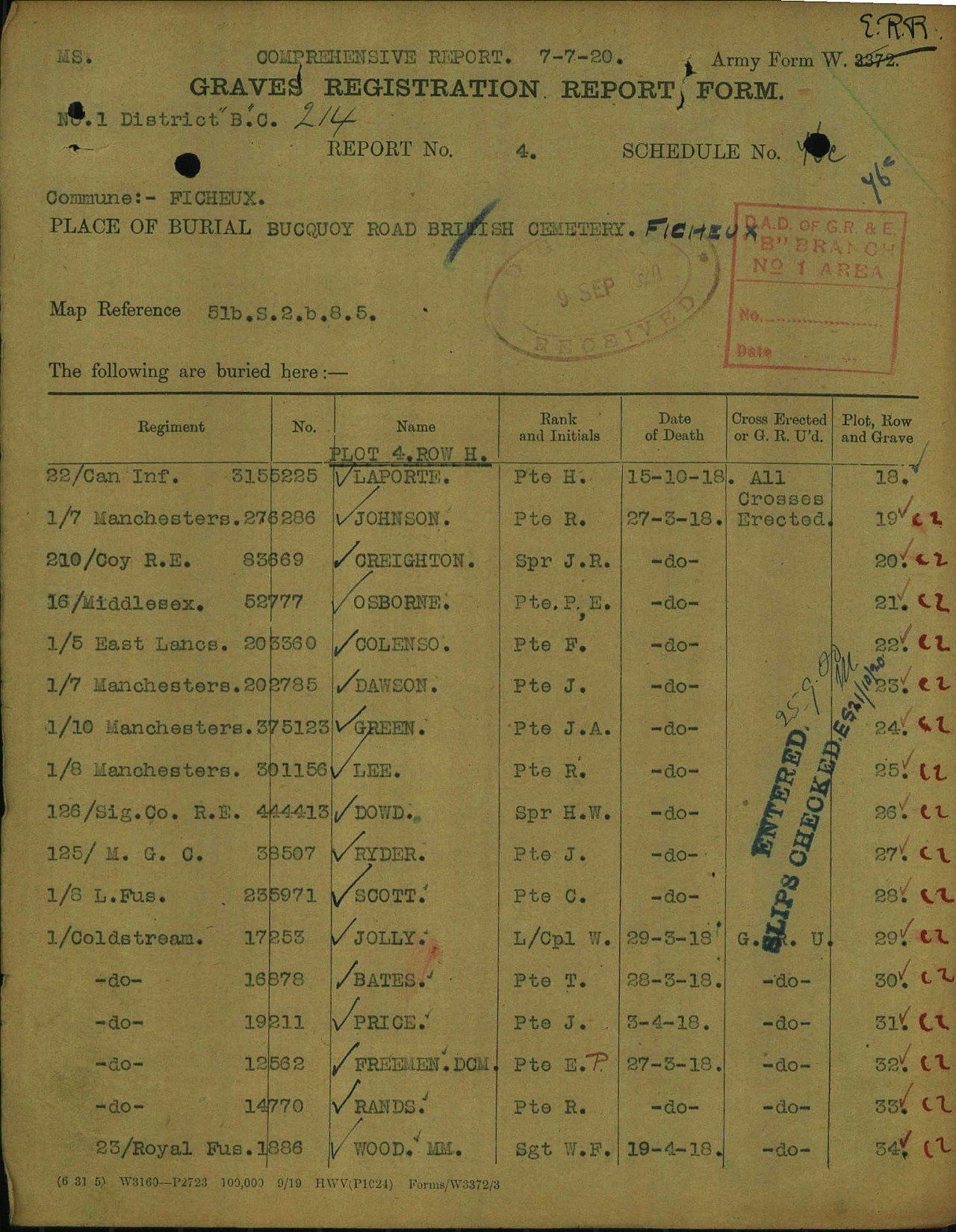 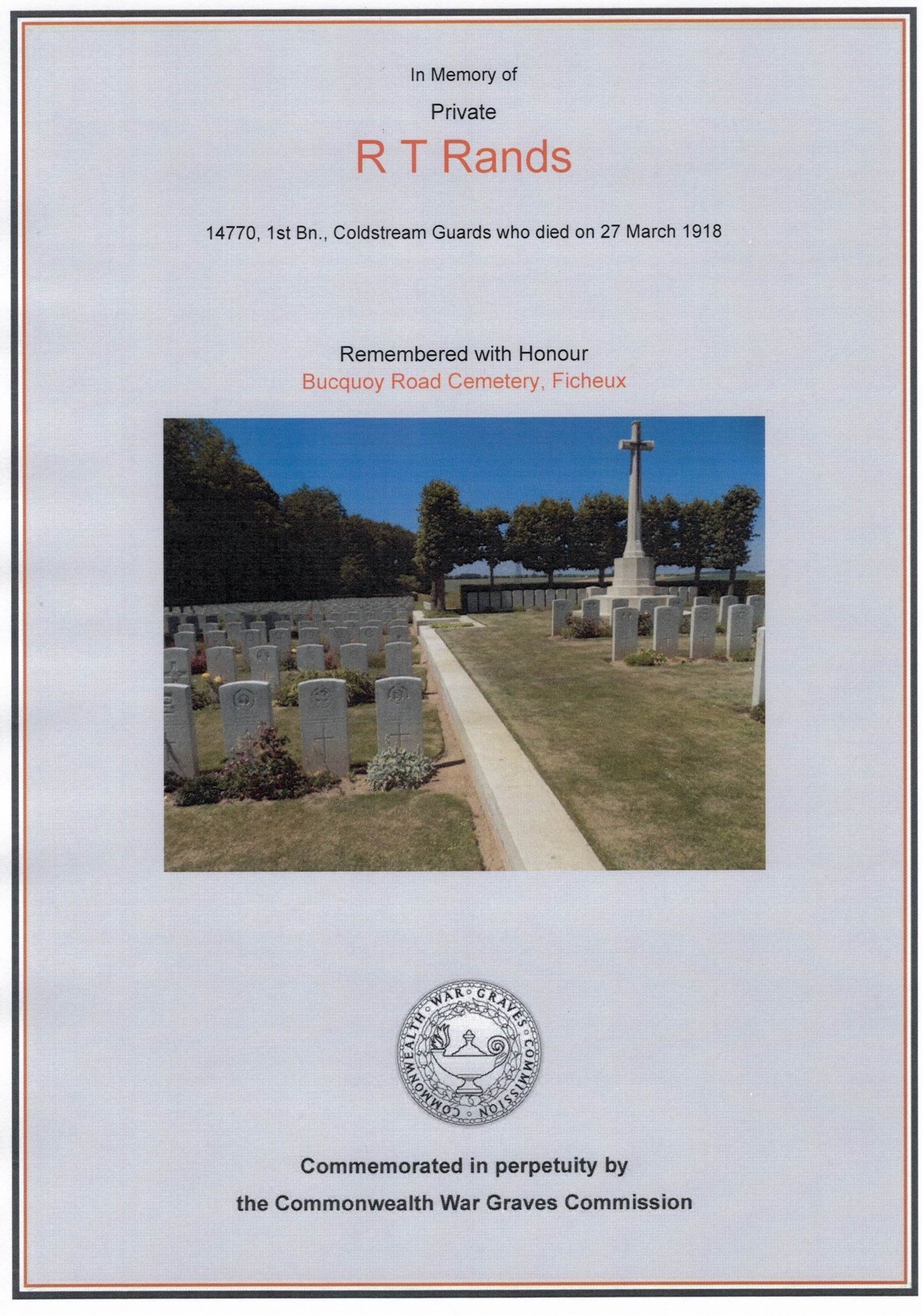