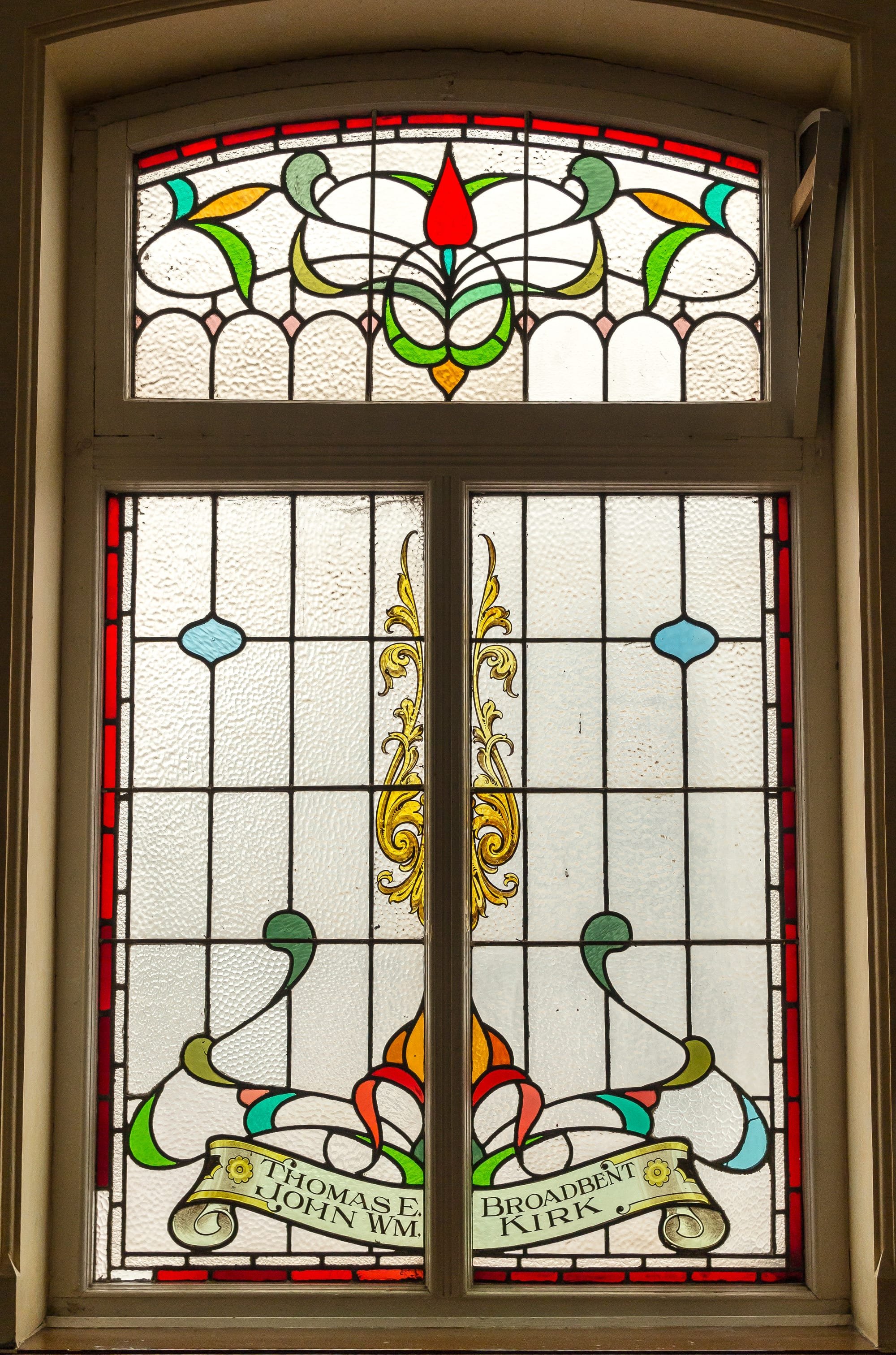 Thomas was the only child of William and Kate Broadbent. William came from Luddington and Kate was from Owston Ferry. They were married at Bottesford church on the 10 December 1885.

William was the eldest son of Thomas Broadbent who was the Post Master, grocer and draper in the village of Luddington, so it is not very surprising to find him engaged in the same line of work after he and his wife Kate settled in Ashby. Prior to her marriage to William Kate had been working as a domestic servant to a family in Anlaby.

Thomas was born in late December 1889 and by the time he was 21 in 1911 he seemed set to follow in his father’s and grandfather’s footsteps, as the census shows him working as a grocer in the family shop in High Street in Ashby. 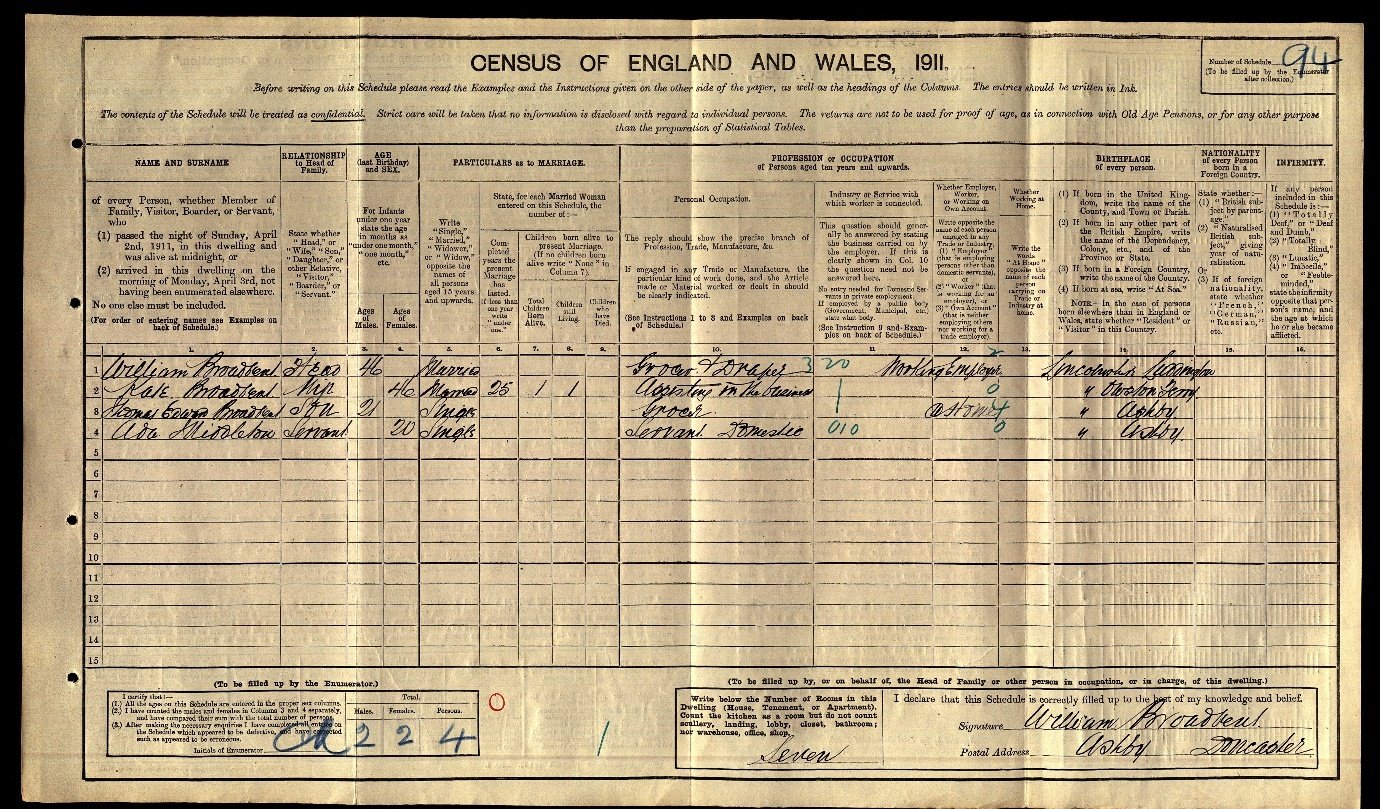 We have very little information beyond this except that we know from the fragment of Thomas’s attestation papers that has survived that he enlisted into the Lincolnshire regiment, at Lincoln, on the 21 August 1911. 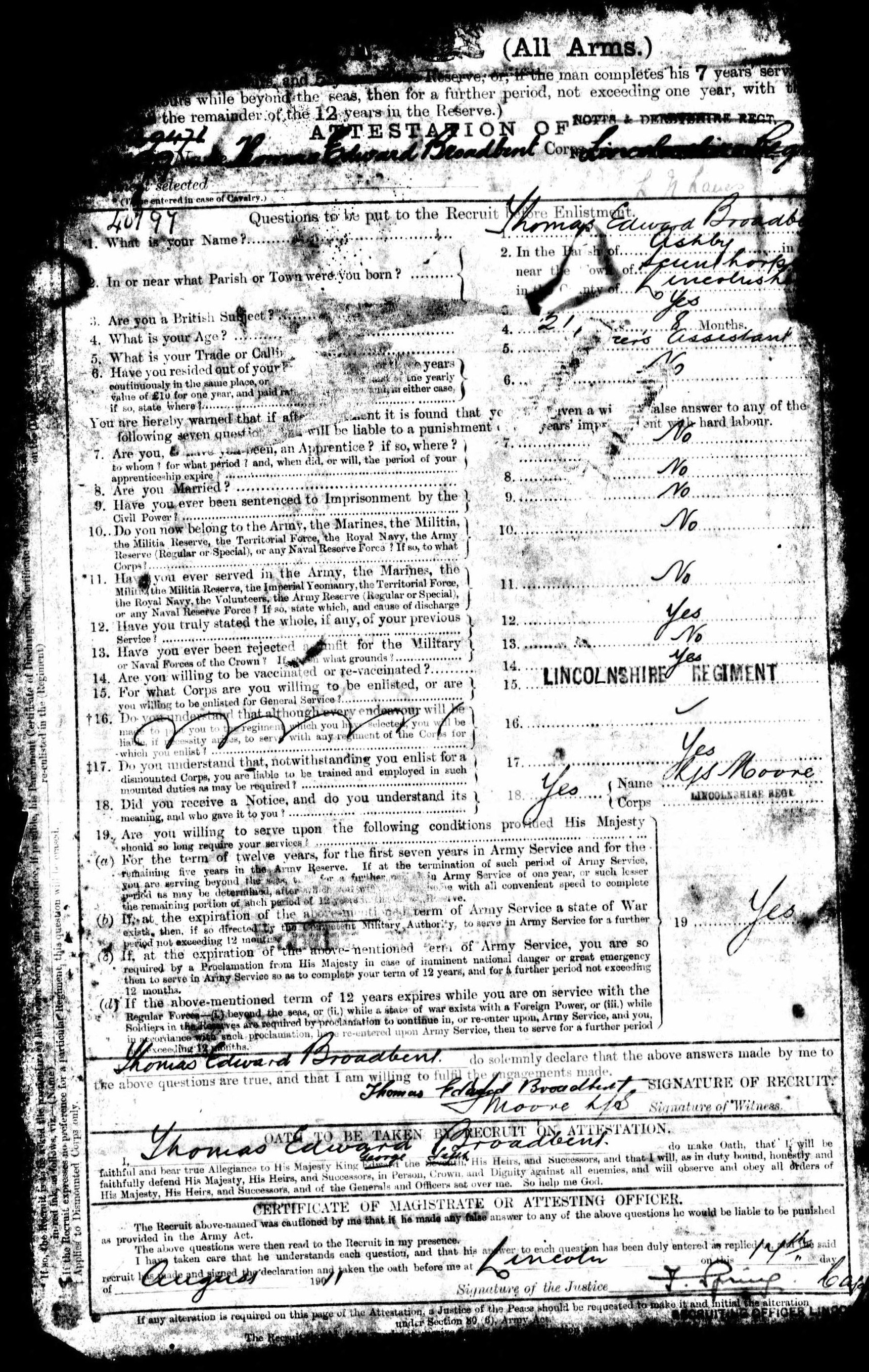 In 1916 he married Louisa Maud Richards in Portsmouth. She was a local girl from Portsea Island whom he had no doubt met while the 2nd Lincolns were stationed there.

After the war Louisa married Stanley Turtle on the 5 April 1923 in Bottesford church. She died in 1967 and we have been unable to trace any surviving members of Thomas’s family.

As we have already seen, Thomas was a regular soldier serving in the 2nd Battalion of the Lincolnshire Regiment when war broke out. Between 1911 and the outbreak of war he served with the 2nd Lincolns in Bermuda and Gibrlatar.

In August 1914 he would, just like all the other soldiers who were already serving, have been given the option of going to the front or remaining at home to train the new recruits. We can see from Thomas’s medal record (see below) that he chose to fight and was part of the British Expeditionary Force (BEF). He disembarked in France on the 5 November 1914.

The regiment moved up to the front line and during the course of the fighting in November Thomas was wounded in the leg. This was reported in the Scunthorpe and Lincolnshire Star at then time, Thomas being one of the first local casualties of the fighting on the Western Front. We assume that he continued to serve with the regiment until the end of January 1918 when, as we can see from the extract from the war diary, 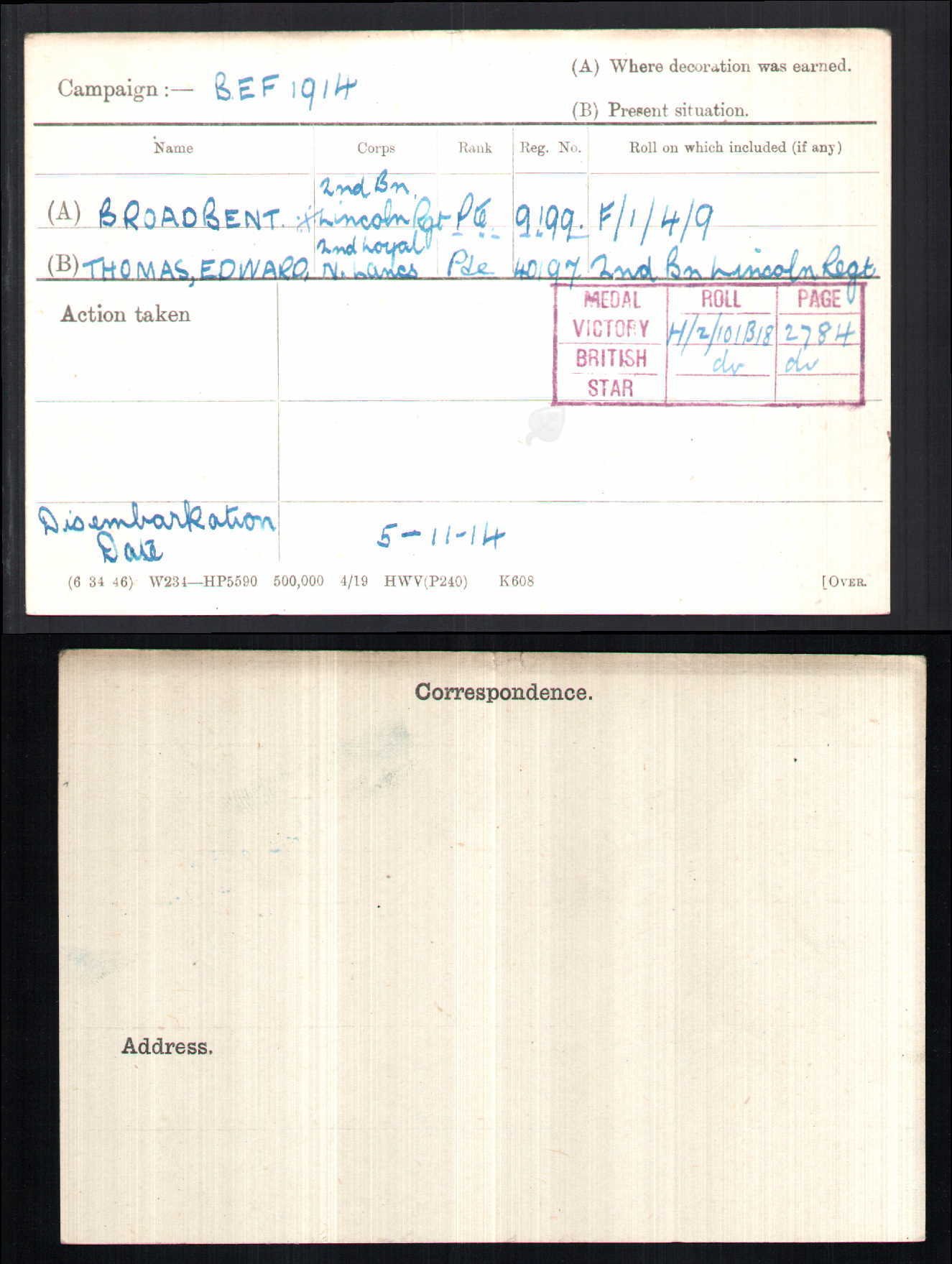 “the Battn. Received orders that it would proceed to join the 21st Division at an early date.”

By July 1918 Thomas found himself fighting with the 2nd Battalion Loyal North Lancashire Regiment at the southern end of the front around the area of Soissons and Chateau Thierry. They had been sent to relieve a French Colonial Regiment which was fighting alongside other French and US Divisions in an attempt to regain the ground won by the Germans in their Spring offensive. The salient fought over was relatively close to Paris and therefore of great strategic importance to the Allies.

The war diary of the battalion for the 22/23 July 1918 makes harrowing reading. They were ordered to attack and “At about 8 o’clock “C” Coy. first wave, consisting of No:12 Platoon advanced and immediately O.C L. N. Lan. Regt. Countermanded the order.

The first wave, after advancing 50 yards, was practically wiped out, the remnants falling back under heavy machine gun and artillery barrage which came down on our trench within a minute of the first wave advancing.”

The losses on that morning were great and the fighting intense. There were 13,000 British casualties, together with 95,000 French and 12,000 American soldiers killed or wounded over the five days of the Battle of Soissons.

Thomas is buried in the Raperie British Cemetery  at Villemontoire. 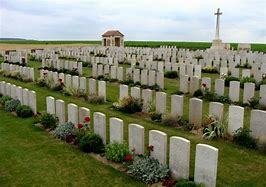 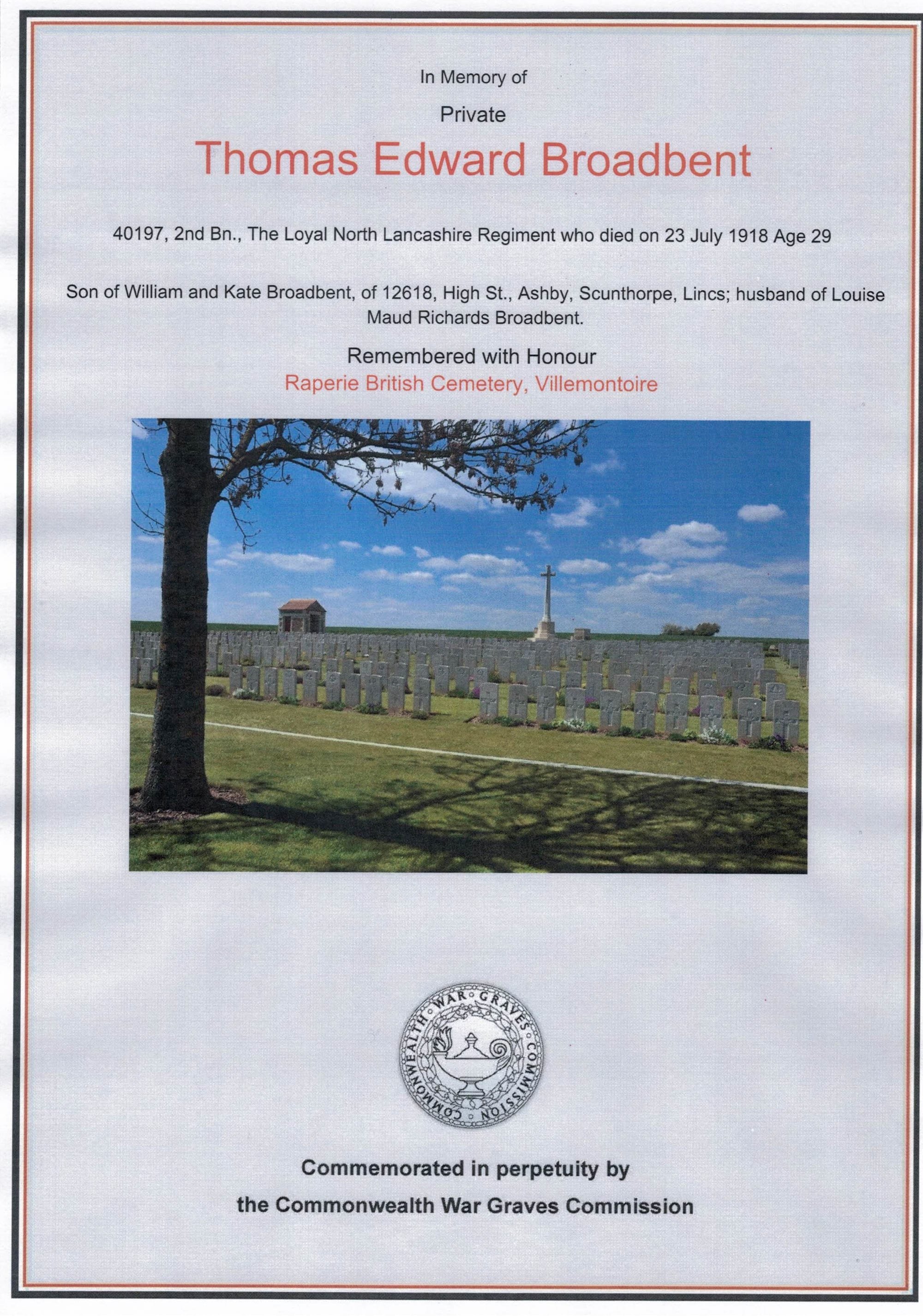